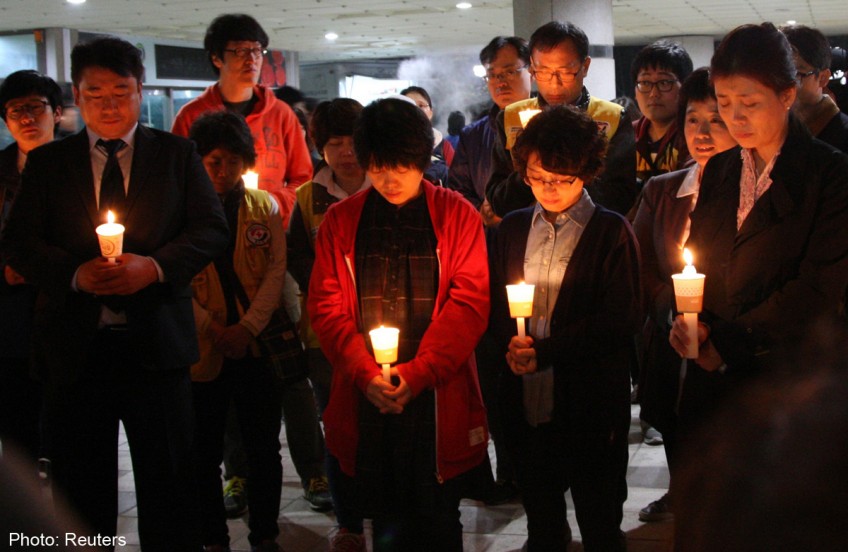 Family members of missing students who were on the South Korean ferry "Sewol" which sank in the sea off Jindo attend a candlelight vigil at Danwon High School in Ansan April 16, 2014.

As the death toll creeps up and hope fades for about 240 missing passengers on the submerged ferry, grief and despair are sweeping through the nation. Many South Koreans opt for donations and volunteer work over spring festivals, weekend getaways and Easter celebrations.

At the frontline of the rescue efforts, the families of the missing have been camping out on Jindo Island off the southwestern coast since the Sewol capsized and sank there.

But it is the entire population, not only the relatives, that is grasping at straws. For many, it was like losing a family member or close friend.

"I just can't stay focused at work when thinking of the victims, especially the students," says Yoon So-ra, a 30-year-old company employee.

Some 320 students from Danwon High School in Ansan, Gyeonggi Province, were among the 476 on board.

"Most of them were so young that they have yet to get their fingerprints registered, which means it would take much longer to confirm their identities even if their bodies have been found."

Oh Mi-jin, a 37-year-old mother of two, expressed deep regret that the ferry operators and maritime authorities didn't respond much better in the initial moments after the accident.

"Prevention must have been possible, or they could have been able to minimise the casualties at least," she says.

"I don't think I would send my children on school trips ― this kind of man-made disaster may occur again."

While a mixture of sorrow, anger and desperation prevails, many central and local governments have postponed meetings and public events. A multitude of much-touted K-pop concerts, performances and sports events were put on hold or cut back, with singers and actors relaying donations.

"We pray for a miracle," said a banner put up at a serene football stadium in Seoul on Sunday. Another read "Cheer up, you will come back. Miracles do exist for you."

Despite what looked like the perfect conditions for an outing, theme parks, shopping hotspots and major downtown districts appeared much quieter than normal this weekend.

Everland, an amusement park run by Samsung Group in Yongin, Gyeonggi Province, registered about 30,000 in the number of visitors as of 4 pm Saturday, down more than 30 per cent from a week ago, officials say. Seoul Grand Park in Gwacheon also saw its own figures plunge by nearly 24 per cent that day to around 25,000.

Some 2,300 people visited the Hallasan National Park on the resort island of Jeju on Sunday, which is almost half its weekend average, while Mount Yongmun in Yangpyeong on the outskirts of Seoul had about 2,500 mountaineers, marking a 30 per cent decline.

"All our official events were cancelled, and in the office we kept the television on all week long to watch live coverage," said Kim Hyun-joo, a 30-year-old worker at Yongin City Hall.

"We've been also getting queries from city residents who want to join the volunteers or send donations."

At a park in Ansan, some 2,000 Danwon High School students, their parents and residents held an emotional candlelight rally for a third day on Saturday, reading letters and praying together.

"I'm so sorry that the only thing we could do is to pray and hope for a miracle," a Danwon graduate tearfully said while reading her letter at the podium.

"I tried to deny the accident as a lie … it breaks my heart that it is an irrevocable truth. I'm longing for a miracle. Please come back."

Meanwhile, more than 5,000 people with 244 nongovernmental and religious groups have so far volunteered to carry bodies, send out food and clean up the site, according to the Central Disaster and Safety Countermeasures Headquarters in charge of the accident site.

On Easter Sunday, churches and cathedrals throughout country prayed for the safe return of the missing passengers. Cardinal Andrew Yeom Soo-jung expressed sadness and hope for the victims during a mass at a Seoul cathedral.

Temples in North Chungcheong Province said they have decided to hold a solemn mass for the May 6 Buddha's Birthday instead of music concerts.

About 50 days ahead of a pivotal local election, the ruling and opposition parties have reached at a rare truce, suspending primaries, campaigns and other related procedures.

Some observers raised the possibility of a delay of the election, but the chances of this are slim as it would require a legislative amendment.