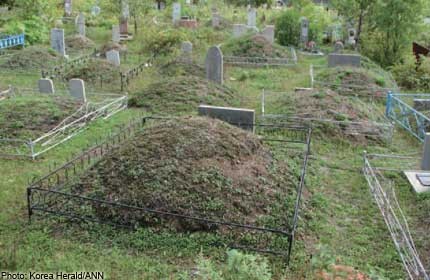 Graves of Koreans in Sakhalin Oblast, Russia Commission on Victims of Forced Mobilization

KOREA - Nearly seven decades after the Korean Peninsula was liberated from Japan's colonial rule, the matter of Tokyo's compensation for Koreans conscripted into forced labour and military service remains unresolved.

After annexing Korea in 1910, Japan used the peninsula as a pantry full of resources, for labour and as a forward base for its military ambitions.

Japan's exploitation of Korean labour took off in earnest in 1939 when the National Service Draft Ordinance was added to the National Mobilization Law that allowed the drafting of civilians into the war industries.

At first, the ordinance was applied only to Koreans with skills applicable to specific industries such as steel and airplane production. However, as labour shortages rose to unmanageable levels at the height of the Pacific War in 1944, Japan's cabinet approved bringing unskilled laborers from the Korean Peninsula on Aug. 8 that year.

From then on, massive numbers of Koreans were conscripted as laborers and shipped to Japan and other occupied territories including China and Southeast Asia.

"Some academics estimate that as many as 2 million Koreans were conscripted as soldiers and support staff for the Japanese military and as laborers," said Park In-hwan, chief of the Commission on Verification and Support for the Victims of Forced Mobilization under Japanese Colonialism of Korea.

In comparison, the Korean population of the peninsula stood at about 23.5 million in 1940.

Of the estimated 2 million conscripted, about 1.3 million were shipped abroad and the remainder were sent to build military facilities in various locations on the Korean Peninsula including Jeju Island and the south coast.

Many never returned home, being killed during service or dying years later in foreign lands.

"There are remains in Japan, Polynesia, Papua New Guinea, Sakhalin and Saipan. In Sakhalin alone, there are tens of thousands of remains (of conscripted Korean laborers)," Park said.

Koreans who were conscripted as laborers for Japanese companies and worked abroad under grueling conditions have only now started to gain legal recognition of their rights to compensation.

On July 10, the Seoul High Court ruled in favour of four Korean victims of forced labour and ordered Nippon Steel and Sumitomo Metal Corp. to pay 100 million won (S$114,000) to each plaintiff.

Three weeks later, the Busan High Court made a similar ruling against Mitsubishi Heavy Industries, ordering the Japanese company to pay 80 million won to each of the five forced laborers.

However, Nippon Steel and Sumitomo Metal have already appealed, and Mitsubishi Heavy Industries is expected to follow suit.

Comfort women are women of various nationalities, mainly Korean, who were forced to serve as sex slaves for Japanese soldiers in the first half of the 20th century. Despite evidence to the contrary, Japan has maintained for decades that the comfort women were never forced by the state into sexual slavery.

Japanese courts have thrown out numerous suits filed by Koreans seeking compensation on the grounds that Japan's responsibilities were fulfilled by the agreement.

However, Korean activists, lawyers and even some Japanese legal professionals have argued that the individuals' right to claims remain intact, saying that the Korean government was not authorised to be their proxy in conducting the negotiations.

Although the Korean authorities had held the view that the 1965 agreement nullified the individuals' right to claims, this opinion has shifted in recent years.

"Individuals' right to claims should be considered to exist. In the past, both Korea and Japan said that the right didn't exist. Then both agreed that the rights did exist, but Japan has gone back to denying it," said Kim Young-won, the Ministry of Foreign Affair's special ambassador for issues concerning the Korea-Japan Claims Settlement Agreement.

He added that after a Constitutional Court's ruling regarding comfort women, the Korean government had attempted to engage Japan to discuss related issues, but to no avail.

In 2011, the Constitutional Court ruled that the Korean government had failed to make all diplomatic efforts to obtain compensation for the comfort women, and that the government violated their basic rights through its lack of action.

"Japan could argue that we are defaulting on a treaty as the interpretation (of the situation) has changed since 2005," Kim said.

In 2005, a study conducted under the Prime Minister's Office concluded that the 1965 agreement covered victims of Japan's colonial rule with the exception of those sent to Sakhalin, comfort women and those who were affected by the nuclear bombing of Japan.

Jumble of records buried in time

However, Japan has not always held its current position.

Recently revealed records show that the Japanese government had the intention to compensate those forced into labour individually and to treat their right to claim separately from that of Korea.

In April, Choi Bong-tae, a lawyer who is leading the suit against the Japanese government, revealed a partial record of the Korea-Japan negotiations in 1961 showing that Hayato Ikeda, the Japanese prime minister at the time, suggested such measures to former President Park Chung-hee.

In the document, Ikeda is quoted as saying that his government was willing to apply the same standards it was using to compensate Japanese nationals to Korean victims.

Ikeda is also on record as saying that his government would consider providing pension and consolation payments to those who had returned to Korea.

However, all such measures were excluded from the final agreement reached in 1965. Instead, Korea received $500 million (S$632million) ―- $300 million of which was a free grant ― from the Japanese government and $200 million in loans from Japan's private sector.

"Our government sold the people out. In 2005, documents were disclosed in Korea and it showed that the government requested $200 for every survivor, $1,650 for each person who died and $2,000 for each one who was injured," Choi said.

However, Choi believes the full records, which Japan has refused to disclose, will tell a different story.

"Japan will not disclose the parts (that contain the Korean government's response). If those parts are disclosed, the fact that the money they provided in 1965 was not for conscription victims will be made clear," Choi said.

"I suspect that if those parts are revealed, it will show that Japan told (the Korean government) not to give that money to the victims."

"Diplomatic records are usually made public after 30 years. It has been 50 years (since the negotiations), and the fact that they (Japanese government) are unwilling to open the records even today proves that they know just how much wrong they did," Choi said. He added that the reason Japan was keeping the remainder of the documents secret was that the records would prove that the victims had not been compensated, which would in turn lead to huge costs.

"Revealing documents doesn't require money. What is needed now is not money, but the courage to look at the truth."

Although the Korean government began laying the legal basis for compensating the victims and their families in 1966, the first payment was not made until 1975.

Even when the payments were made, only a fraction of the victims were able to receive amounts far smaller than what the Korean government demanded from Japan.

By the won-dollar exchange rate of the time, 300,000 won was worth about $622, only about one-third of the $1,650 the government received from Japan for each Korean who died in its service.

The actions taken by the Korean government at the time continue to anger those who survived forced labour and the families of the deceased victims nearly 50 years on.

"We will take it to the end. A few others and I are also preparing suits against the Korean government," said Lee Ju-seon, the head of an association of victims' families.

Lee, whose father died in the South Pacific after he was conscripted into the Japanese navy, says he feels "indescribable injustice."

"The Park Chung-hee government received compensation (from Japan), but we have not seen a penny of it. How can this be?"