South Korea ’s foreign ministry has reached out to Beijing to smooth over an online dispute between nationals from both sides over the late poet Yun Dong-joo, who was born in Mingdong, a village in present day northeast China .

Yun – the son of Korean Christians who left the Korean peninsula in the late 19th century to escape famine – took part in the struggle for independence against Japanese imperialism when both the peninsula and northeast China, historically known as Manchuria, were under Japanese occupation.

In 2012, authorities in Mingdong village – which is located in Longjing city, China’s Jilin province – converted the poet’s ancestral home into a tourist attraction. A plaque near the entrance describes Yun, who Koreans refer to as Yoon, as a “Chinese ethnic Korean patriotic poet”.

But this plaque, as well as a description of Yun on the Chinese-language Wikipedia-like Baidu Baike website, have been criticised as a “historical distortion” by Seo Kyoung-duk, a professor at Sungshin University in Seoul, who wrote a lengthy Facebook post on the subject last week.

The issue, Seo said, stems from Baidu Baike’s use of the word chaoxianzu – the official Chinese term for ethnic Koreans living in China – to describe not just Yun, but a long list of other notable Koreans, including independence activists Lee Bon-chang and Yoon Bong-gil; King Sejong the Great of Korea’s Josean dynasty (1392–1897); and even celebrities born in modern-day South Korea such as competitive figure skater Kim Yuna and actress Lee Young-ae.

An official from South Korea’s foreign ministry, speaking on condition of anonymity, confirmed that they had been in contact with China to discuss the “sensitive issue related to national sentiments”.

Chinese-language platforms have a history of wrongly describing notable Koreans as chaoxianzu , the official said, though he added that entries for former presidents, independence activist Kim Ku and the K-pop star Psy had been corrected in the past at Seoul’s request.

“It is a great mistake for Chinese people to express their sense of crisis at the rise of K-culture through a distorted patriotism”, Seo told This Week In Asia , referring to the increase in global popularity of South Korean culture in recent decades. “I strongly suspect the Chinese government is behind it all.”

Chinese internet users and the country’s state-run media were both quick to respond to Seo’s Facebook post.

On the Twitter-like platform Weibo, the hashtag in Chinese “Korean Professor Demands Poet’s Ethnic Korean Nationality is Changed to South Korean” was used more than 490 million times over the past week, with one post suggesting the plaque be changed to read “famous Chinese poet from the province of South Korea” receiving more than 83,000 likes.

Seo – who recently placed an advertisement in The New York Times promoting kimchi as a purely Korean culinary offering, countering Chinese state media reports equating the dish to pao cai – said in his Facebook post that he had first lodged a complaint with Baidu Baike on December 30, Yun’s birthday, and again on Feb 16, the date of the poet’s death, but no changes have been made.

The dispute over Yun’s identity has not inflamed South Korean internet users’ passions to the same extent as the kimchi row, though some have still taken to Korean news portals to express their feelings.

“If Yoon were Chinese he would have written poems in Chinese”, wrote one user, echoing a point made by South Korea‘s Yonhap news agency, which said the poet had written almost exclusively in the Korean language, noting that his use of Chinese in the poem A Night for Counting Stars was in reference to “foreign girls‘ names”.

“I would not be surprised if the Chinese claim Hangeul belongs to them as well”, another user posted in reference to the Korean alphabet.

In its report on the topic, Global Times cited Lu Chao, director of the Liaoning Academy of Social Sciences’ Research Institute for Borderland, as saying that Yun “should become a bridge for enhancing cultural communications in both countries rather than being used to drive them apart”.

“The Korean peninsula was previously a vassal state of China,” Lu said. “The cultures of the two countries have much in common, which is worthy of joint study and discussion.”

But a Beijing-based South Korean researcher, who asked not to be identified for fear of reprisals, told This Week in Asia that it was inaccurate to call Yun “Chinese”, as the region where he and thousands of other Koreans lived was also colonised, if not formally annexed, by Russian and Japanese forces at the time. 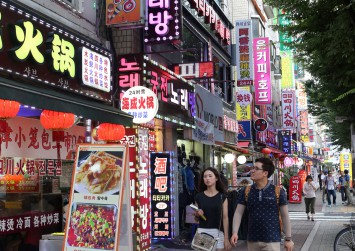 “I think the label used should just be ‘ethnic Korean’, [Yun] was not part of what is today known as China, North Korea, and South Korea,” said the researcher, referring to the fact that all three modern-day states came into being after Yun’s death in a Japanese prison in 1945, age 27.

Yun’s body of work, posthumously published in a collection titled The Heavens, the Wind, the Stars and Poetry , remains a staple of school textbooks in South Korea. Verses from his poems such as Prelude are well known for evoking the sense of loss and shame many Koreans felt at having their homeland colonised.

China is home to about 2 million ethnic Koreans, who are officially recognised as members of one of the country’s 55 ethnic minority groups by the ruling Communist Party.

Many live in Yanbian, an autonomous prefecture of Jilin province, where schools that offered classes in Mandarin and Korean were commonplace until relatively recently. A ruling by Beijing’s top legislative body in January last year declared the practice unconstitutional.