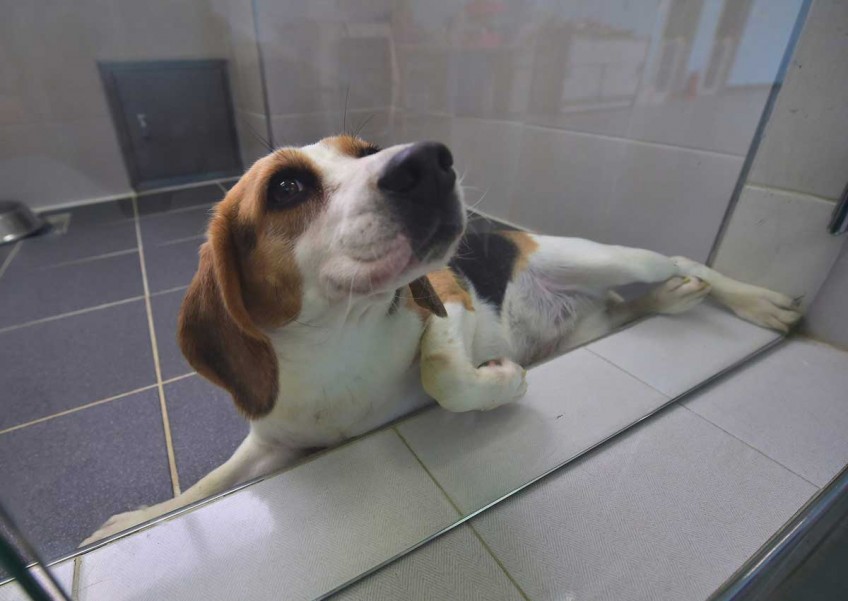 This picture taken on June 29, 2016 shows a cloned dog in a glass-fronted pen at a care room of the Sooam Biotech Research Foundation, a world leader in pet cloning, in Seoul.
AFP

AT US$100,000 (S$134,550) a head, the puppies frolicking around the fenced lawn in western Seoul do not come cheap - but at least their owners know exactly what they are getting.

The lawn belongs to the Sooam Biotech Research Foundation, a world leader in pet cloning that has run a thriving commercial business over the past decade catering to dog owners who want to live with their pets forever... literally.

With a client list including princes, celebrities and billionaires, the foundation offers owners protection against loss and grief with a cloning service that promises the perfect replacement for a beloved pet.

"These people have a very strong bond with their pets... and cloning provides a psychological alternative to the traditional method of just letting the pet go and keeping their memory," said Wang Jae Woong, a researcher for Sooam.

Sooam Biotech clones many animals, including cattle and pigs for medical research and breed preservation, but is best known for its commercial dog service.

The process involves harvesting a mature cell from the dog to be copied and transferring its DNA to a donor egg cell that has had its own genetic material removed.

The cell and the egg are "fused" with an electrical jolt.

The resulting embryo is implanted in a surrogate mother dog which will give birth about two months later.

Despite the US$100,000 price tag, requests for the service have poured in, Mr Wang said, with around half from North America.

One well publicised cloning was of Trakr, a former police dog hailed as a hero after discovering the last survivor of the 9/11 attack on the World Trade Center.

Sooam produced five clones after Trakr's owner won a contest for the world's most "clone-worthy" dog.

High-profile clients have included Princess Shaikha Latifah of Dubai who cloned her pet dog in 2015.