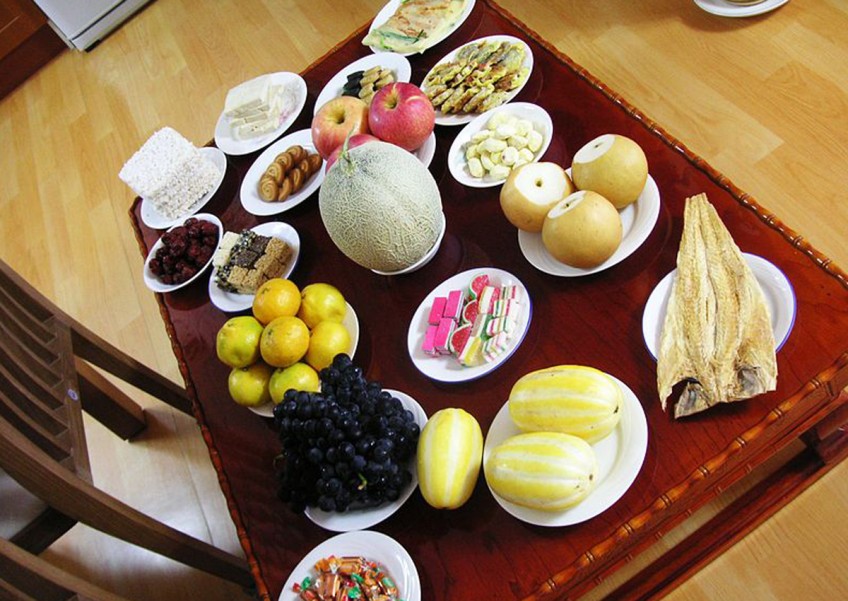 A table with many traditional food offerings on it.
Wikipedia

For most Koreans, this year's record-long Chuseok holiday, stretching for 10 days from Saturday, means a long-awaited chance to catch up with family and friends and get some much-needed sleep and rest.

But the holiday means "stress" for many foreign women, who moved to Korea after marrying Korean men, largely due to the cultural differences and language barriers.

"Back in Cambodia, I looked forward to traditional holidays. It is when we wear beautiful clothes, prepare delicious food and go to a temple with family," said Nagre, 34, who has lived in Seoul since she married a Korean man in 2007.

"In Korea, it is terrifying and stressful. I sometimes feel like I am a machine (during the traditional holiday.) I wear an apron all day preparing food and washing dishes," said Nagre, who lives with her in-laws. Her husband is the eldest son, making her the "chief" daughter-in-law, who is traditionally tasked with much of a family's household chores.

It was worse when she could not speak Korean, she said.

"When I first got here and could not speak Korean, I didn't know what to do and was worried that I might make a mistake. We communicated through body language."

In a society where traditional ideas about gender roles still remain, Korean women, too, cannot be free from such stress during the family holiday.

According to market research firm M-Brain Trend Monitor on 1,000 men and women aged between 19 and 59, 88 per cent of the respondents thought that Chuseok holiday is tough for women. Some 69 per cent said that it is a day on which hard labour is required of women.

But the burden falls most heavily on foreign women who are not used to Korea's patriarchal culture.

"In Cambodia, men and women prepare food together. Here, men in general do not seem to help women a lot with household chores," she said.

For Nena, a 44-year-old Filipina who lives with her Korean husband and two teenage children, the most challenging part is preparing food for "charye," a traditional ceremony involving a heavily laden table prepared in remembrance of ancestors.

"We go shopping and begin preparations at least a week before the Chuseok holiday period begins. I was scolded a lot in the past for not knowing how to do it right. One time, I was told off for cooking rice including barley," she said.

During the traditional holidays, there are strict rules in setting the table and preparing the food for the ceremonies. The rules, complicated even for Koreans, include only using rice from the year's harvest.

"Making pancakes on the floor gives me a backache. I am getting used to it, but I have been stressed for years when the Chuseok holiday neared."

According to government data, there were over 152,000 foreigners married to Koreans and living here as of the end of 2016. Of these, 84.3 per cent or about 128,000 are women, mostly from Asian countries. The majority of the foreign wives were from China, accounting for 35.2 per cent, followed by Vietnam at 31.5 per cent, Japan at 9.3 per cent and the Philippines at 8.8 per cent and Cambodia at 3.4 per cent.

Many of the foreign wives, who come from a big family in rural areas, describe Korea's Chuseok holiday as "not fun" amid the shrinking size of the average family and weakening connection with extended families and neighbours.

"In the Philippines, we make a lot of food, it takes a longer time, but I didn't find it difficult to do. I was happy," she said. "We cooked a whole pig. We invite neighbours over and shared food all together."

"To be honest, I don't feel like it is a family holiday here. I am worried about preparing food too much. I feel a heavy responsibility and burden. I want to skip it, even if it is just for once," she said.

While the work involved comes as a burden, foreign wives say that it is loneliness that is the biggest factor in making the holiday season difficult for them.

"In general, my life got more comfortable here. But the thing is I am lonely, though my husband's family treats me well. I wish my family could be here too. I miss them," she said.