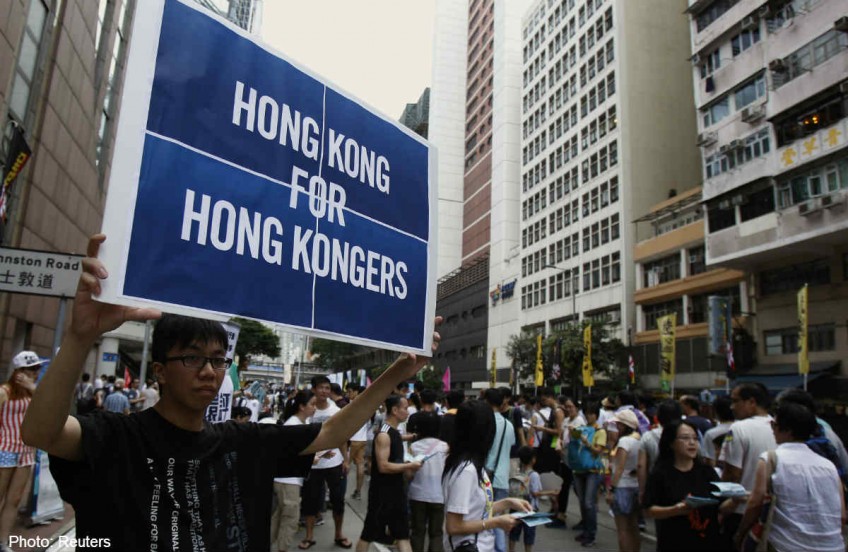 A protester carries a placard during a mass protest demanding universal suffrage in Hong Kong July 1, 2014.

After a hot political summer, Hong Kong is settling into an uneasy limbo before autumn ushers in the chill.

Between now and end-August, when China's legislature is expected to issue its response to Hong Kong's request for universal suffrage, the city's pro-democracy camp is holding back on major civil disobedience activities while both sides scramble to meet.

In a way, it is a last chance to seek out any possibility of a compromise before both sides commit to a point of no return: Beijing, by issuing any dictates that formally rule out what the pro-democracy camp considers to be "genuine universal suffrage", and the pro-democracy camp, by staging illegal activities that threaten to paralyse the city centre.

Academic Joseph Cheng, convenor of the Alliance for True Democracy, a coalition of democrat legislators, said: "The movement as a whole believes that we should wait for a bit before doing anything drastic, because we want to be seen as trying everything we can to find a solution."

This means that a full-scale Occupy Central civil disobedience movement, if there is one, will take place only after next month. Student activists yesterday said they will hold a class strike in September. This comes after the Hong Kong government submitted a report to Beijing on Tuesday, asking for permission to amend the city's electoral laws and allow Hong Kongers to elect their leader in 2017.

The lull though, seems a temporary one, with many expressing pessimism about any possibility of a meeting of minds. Under Hong Kong's Basic Law, the chief executive is to be selected by universal suffrage upon nomination "by a broadly representative nominating committee in accordance with democratic procedures".

While a more radical wing of the pro-democracy camp insists on public nomination, given fears that a committee is a "trap" to winnow out pro-democracy candidates, another group consisting of moderates is signalling that they will settle for plans that may include a nominating committee but which offer Hong Kongers "meaningful choice".

The appeal for choice has traction in Hong Kong society. The Bar Association, while saying that public nomination is incompatible with the Basic Law, has called for alternatives that "ensure maximum participation of the general electorate in the nomination process".

So how should this be defined? One way, says Prof Cheng, is a committee modelled after the current 1,200-strong Election Committee appointed by Beijing or voted in by functional groups representing interests like business.

The key, he says, is the threshold for successful candidates - to allow those with one-eighth of votes to go through. The democrats calculate that this gives one of their own a fighting chance to run for election. "The democracy camp might buy this," he adds.

However, observers poring over the government's report for hints say the chances of Beijing allowing for this are slim.

Law academic Eric Cheung notes its "emphasis" on a two-stage nominating process, including having to garner recommendations by "a certain number" of members.

The "mainstream opinion", the report adds, holds that nominees should "love the country and love Hong Kong" - generally a byword for excluding pan-democrats.

Says Ms Lau: "Many people are pessimistic about this, and I myself am not positive either. But we will still try to fight for it."

Political scientist Linda Li, however, is more hopeful that with the conversation now geared towards the nominating committee rather than public nomination, Beijing will be more open to widening the fairways.

"The central government should see that universal suffrage, as well as an electoral system that the Hong Kong people support, is necessary and very critical for Hong Kong's better governance.

"If Hong Kong's governance continues to go downhill, I don't see how that will be good for Beijing."