A house on The Peak, which looks out over Victoria Harbour, has been burgled.

A luxury house on The Peak in Hong Kong was burgled on Wednesday as the number of break-ins soared during months of protests that have diverted resources away from other areas of policing.

Raids on homes, offices and shops over the summer increased nearly 50 per cent compared with last year as criminals take advantage of the ongoing civil unrest.

In the early hours of Wednesday, a thief broke into Overthorpe in Mount Austin Road, where one agency had listed a property for sale at HK$180 million (S$31 million).

Police, who were alerted to the break-in by a woman at about 9.30am, said one of the bedrooms had been ransacked and valuables were stolen.

"Officers pored over the security camera footage that showed a burglar broke a window and climbed into the house at about 4am," a police source said.

Between June and September, police figures show reports of burglary rose 48.8 per cent to 720, from 484 in the same period last year. 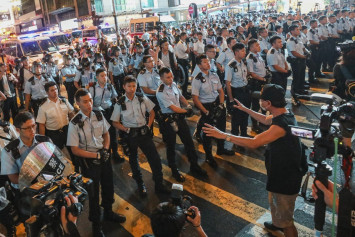 The number of robberies also increased 6.5 per cent to 53, while reports of snatch thefts soared 51 per cent to 62.

The Post was told last week that anti-crime operations were on a smaller scale and less frequent than previously because many officers had been drafted to deal with violent street protests.

In August, police stopped patrolling Hong Kong's streets by foot because of the lack of available officers, as well as the heightened risk of being attacked by hard-core protesters. Officers are instead patrolling in police vans.

On September 21, the deluxe mansion of Hong Kong tycoon Richard Li Tzar-kai in Shek O was the target of a burglary. No property was stolen and police arrested a 31-year-old male visitor from mainland China for attempted burglary.

According to police statistics, protest-related crimes led to a 100 per cent rise in reports of assault on police and a significant surge in public order offences between June and September, compared with the same period last year.

Figures show reports of assault on police soared to 148, and cases of offences against public order, including unauthorised assembly, increased to 168 in the same period. 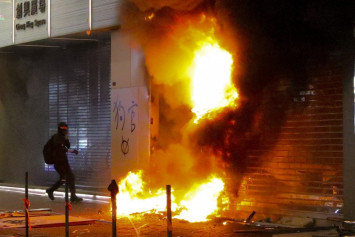 But the city's overall crime rate fell 7.2 per cent to 17,432 cases during that time period.

The number of violent crimes - including murder, rape and armed robbery - also fell by 204 to 2,901 over that period.

Hong Kong has been gripped by nearly five months of social unrest sparked by opposition to the now-withdrawn extradition bill, which would have allowed the transfer of criminal suspects to the mainland.

Officers have so far fired more than 6,100 rounds of tear gas, 2,400 rubber bullets, 550 beanbag rounds and 700 sponge-tipped rounds at protesters.

Radicals have hurled petrol bombs in return, smashed up MTR stations and vandalised businesses regarded as having mainland links.