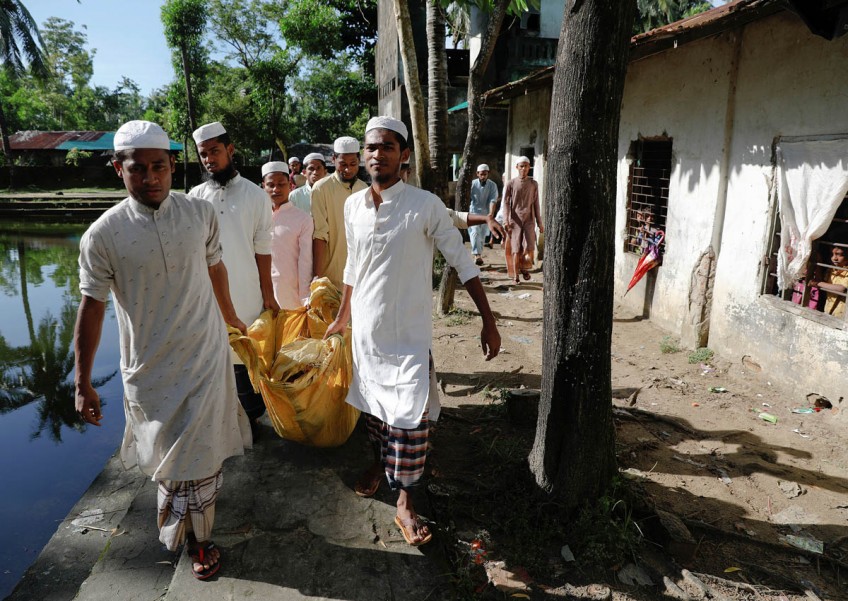 Bangladesh - At least 12 Rohingya Muslim refugees, mainly children, drowned when their boats capsized on the way to Bangladesh, police said on Monday, the latest victims of violence in Myanmar that has forced more than half a million people from their homes.

The boat sank near Shah Porir Dwip, on the southern tip of Bangladesh, late on Sunday, Bangladesh authorities said.

It was not known how many people were on board but the boats operated by fishermen often cram in dozens of desperate Rohingya fleeing a Myanmar security operation that the United Nations has denounced as ethnic cleansing.

Bangladeshi police officer Mohammed Mainuddin told Reuters that 12 bodies - 10 children, one woman and a man - had been recovered.

A Reuters photographer earlier saw the bodies of four children, two women and a man washed up on a beach.

Authorities said earlier at least eight people had been rescued.

Some 519,000 Rohingya have fled Myanmar since Aug. 25, when attacks by Rohingya militants on police and military posts in Rakhine State sparked a ferocious response from Myanmar's security forces.

Myanmar rejects accusations of ethnic cleansing and has labelled the militants from the Arakan Rohingya Salvation Army, who launched the initial attacks, as terrorists.

The insurgents declared a one-month ceasefire from Sept. 10, which is due to end at midnight on Monday.

The ability of the group, which only surfaced in October last year, to mount any sort of challenge to the Myanmar army is not known but it does not appear to have been able to put up resistance to the military offensive unleashed in August.

It would be very difficult for the insurgents to operate in areas where the military has flooded in and driven out Rohingya civilians, in the north of Rakhine Sate, near the border with Bangladesh.

The insurgents said in a statement on Saturday they were ready to respond to any peace move by the Myanmar government, but also noted that the ceasefire was about to end.

More than six weeks after the violence erupted, Rohingya continue to arrive in Bangladesh, which was already home to 400,000 members of the Myanmar Muslim minority before the latest crisis.

Mostly Buddhist Myanmar does not recognise the Rohingya as citizens, even though many have lived in Rakhine for generations.

Sunday's accident was the latest involving refugees. On Sept. 28, a boat carrying about 80 refugees overturned with only 17 survivors.

In early September, 46 bodies were recovered after a boat sank in the narrow stretch of water that separates Myanmar and Bangladesh. Among the dead were 19 children, 18 women and nine men.