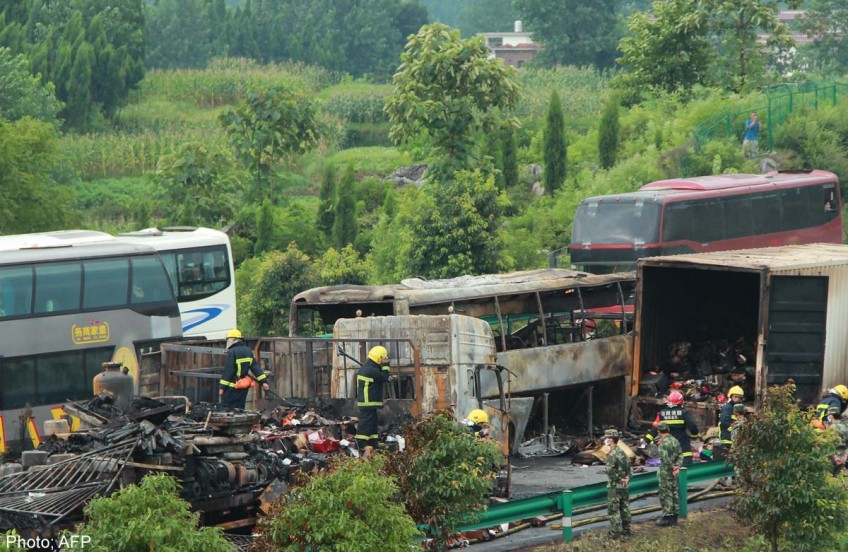 Rescuers attend to the scene of a car accident in Longhui county of Shaoyang, central China's Hunan province on July 19, 2014.

BEIJING - At least 38 people were killed when a van carrying flammable liquid hit a bus on a highway in central China early Saturday, state media reported.

The collision in Hunan province triggered a fire and explosion which destroyed five vehicles, the Xinhua news agency said.

Another five people were injured in the accident, which occurred at around 3:00 am, Xinhua said, citing police.

The fire was finally put out by about 8 am.

The double-decker long-distance bus, with capacity for 53 occupants, was travelling between the eastern coastal province of Fujian and Guizhou in the southwest when the crash occurred.

Senior work safety and transport ministry officials and police were heading to the site to investigate, Xinhua said.

Fatal road accidents are a serious problem in China, where the highway network and number of new drivers are expanding rapidly while traffic laws and safety are widely flouted.

At least 42 people were killed when fire engulfed a bus during rush hour in the city of Xiamen, Fujian, in June last year.

In August 2012, at least 36 people died when a double-decker sleeper bus slammed into the rear of a methanol tanker and burst into flames in northern China.

A study published in 2011 by a group of Chinese and US researchers concluded, however, that the number of deadly accidents was two times higher than the police claimed.