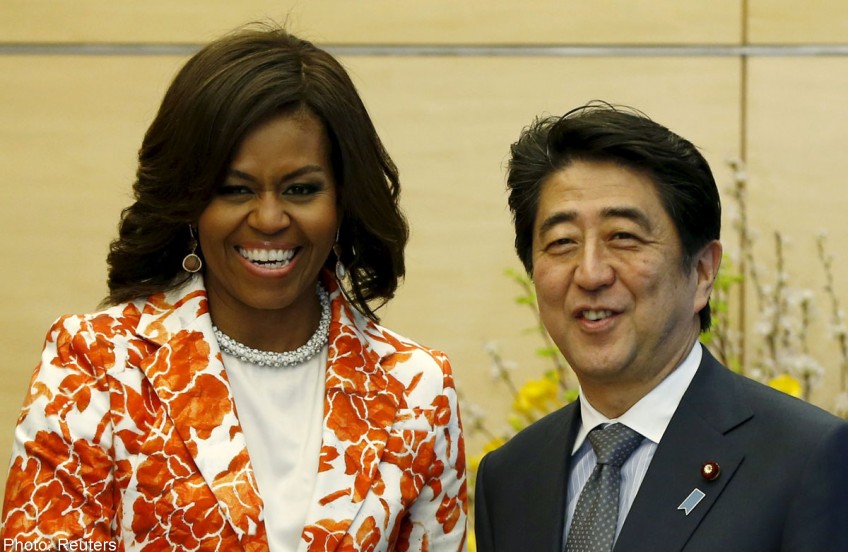 TOKYO - Michelle Obama suggested a lunch date with Shinzo Abe at his wife's restaurant on Thursday, offering the Japanese prime minister a place at her table next time she is in town.

The US first lady gave a ringing endorsement of Akie Abe's "izakaya" - a traditional Japanese-style pub - after eating there with her opposite number on the second day of her visit to Tokyo.

"Prime Minister, first of all, your wife is an amazing woman," said Obama, as she met Abe at his office. "And the restaurant is good, so you have to try it. Maybe the next time I come to visit, you can join us." In a good-natured exchange at Abe's office, he revealed: "Actually I've never been to the restaurant".

Earlier in the day Obama, who is in Japan to launch the "Let Girls Learn" initiative,told an audience there was a global "crisis" that left 62 million girls without the chance of an education.

"We often focus on the economic barriers girls face - school fees or uniforms, or how they live miles from the nearest school and have no safe transportation, or how the school in their community doesn't have bathroom facilities for girls," she said.

"But we all know that the problem here isn't just about infrastructure and resources. It's also about attitudes and beliefs. It's about whether fathers - and mothers - think their daughters are as worthy of an education as their sons." Obama, who arrived in Tokyo on Wednesday without her husband President Barack Obama, said both Japan and the United States were big donors to "Let Girls Learn", which aims to help young women in developing countries.

The US First Lady, wearing a bright, floral patterned jacket and skirt, appeared alongside Akie Abe and Caroline Kennedy, the daughter of President John F. Kennedy and the current American ambassador to Japan.

US officials said Wednesday they were investigating threats made against Kennedy, after a man reportedly telephoned the US embassy saying he would kill her.

Later in the day, Obama paid a visit to the Imperial Palace to meet Emperor Akihito and Empress Michiko.

On Friday, she will visit tourist hotspot Kyoto, where she will go to the 1,200-year-old Kiyomizu Buddhist temple, a stunning wooden structure set in the hills around Japan's ancient capital, as well as a similarly-aged Shinto shrine.

She will fly to Cambodia, one of the first 11 countries the initiative will be operating in, on Friday afternoon from Osaka.

Obama's visit comes ahead of the Japanese premier's planned visit to Washington in late April.

Japanese media have reported that Abe is expected to make a speech on the US-Japan relationship before a joint session of the US Congress.

If the speech is realised, it would be the first time a Japanese premier has addressed Congress since 1961 when Prime Minister Hayato Ikeda spoke before the House of Representatives.

Barack Obama came to Japan in April last year, but his wife was absent because their daughters were at school.