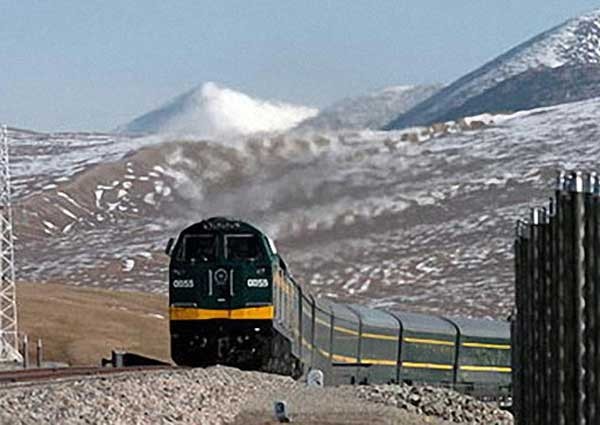 About 1,375 years ago, Wen Cheng, a Han princess of the Tang Dynasty (AD 618-907), took nearly three years to travel the 2,800 kilometers from today's Xi'an, Shaanxi province, to Lhasa, Tibet, to marry Songtsan Gampo, the Tibetan king.

Now, thanks to the opening of the Qinghai-Tibet Railway 10 years ago, the trip takes just 32 hours.

People across the country have enjoyed the modern benefits of speed and economy. Zhou Heng, 25, can reach his fiancee in Lhasa in less than four days from his hometown in Dalian, Liaoning province.

"The train is cheaper than flying," said Zhou. "I saw her five times last year. I flew once and took the train once. She came by train to see me three times in Dalian. We can't afford frequent flights."

Friday was the 10th anniversary of the opening of the Qinghai-Tibet Railway. Over the past decade, millions of people like Zhou have benefited.

Qinghai province native Chungdak Tsering, 30, is one of the many. "My grandmother is thrilled about the train because it allows her to visit temples in Lhasa and other cities in Tibet easily," he said. "My grandmother is 80 years old. We worried about her health because it took several days to travel to Lhasa in the past. Now she can sleep well on the train, and it takes only one day to reach Lhasa."

The railway is 1,956 kilometers long. At its highest point, it is 5,072 meters above sea level. It is the world's highest line, and the longest built on a single plateau. It is the first railway connecting Tibet with the rest of world.

The railway links Xining, the capital of Qinghai province, to Lhasa, capital of the Tibet autonomous region.

According to the China Railway Corp, the Qinghai-Tibet Railway had carried 115 million passengers and moved 448 million tons of goods as of May.

Tourism surged as visitors to the region exceeded 20 million, creating job opportunities and bringing 28 billion yuan in revenue for local herders and farmers along the line, according to Losang Gyaltsan, chairman of Tibet.

"The railway has greatly improved locals' lives and helped transform the local economy," he said.

The Qinghai-Tibet Railway has 18 loading stations in industrial zones and at coal bases, with trains carrying industrial salt, fertilizer, alkali, coal, aluminium and iron ore from the Tibet Plateau.

Five more stations in a rail section from Golmud, Qinghai province, to Lhasa are under construction, and six other stations will be renovated.

Apart from the Qinghai-Tibet Railway, other railway lines have opened or are planned on the plateau, including one connecting Lhasa to Xigaze in Tibet to Nyingchi, Sichuan province.

To the west, planned lines will link Jilong in Xigaze prefecture with neighbouring Nepal via Yadong, a town near the Nathu La mountain pass.

First Person: It's not easy, but has been the 'best experience of my life'

Working on the Qinghai-Tibet Railway is really not easy, considering the lack of oxygen in the high-altitude environment. But I regard working on this railroad as the best experience in my life.

I am always struck with the beautiful landscape－the snow-capped mountains, the vast Changthang grassland and the wildlife, including yaks and Tibetan antelopes along the line.

I have been working as a railway policeman for 29 years, and I have been in the Qinghai-Tibet section for 10 years.

Because the average attitude is above 4,000 meters, I have many times experienced physical discomfort, including headaches, vomiting, chest distress and loss of sleep. Still, every time I see the beautiful landscape and the wildlife, I am pleased. I'm truly touched by the scenery.

In the past few years, the facilities of the train and the railway overall have improved a great deal, with the regular maintenance and refinements.

When I first came to Lhasa 10 years ago, there were not many buildings around Lhasa Railway Station; however, it has grown and prospered and now has many buildings standing around. Transportation conditions are much improved.

Many people dream of going to Tibet once in their lifetime. I've had numerous trips, and I cherish my experiences on every one of them."

How major challenges were overcome

The world's highest line, and the longest to be built on a single plateau, the Qinghai-Tibet Railway celebrated a decade of safe operations on Friday, putting to rest concerns expressed at the beginning about permafrost, wildlife preservation and sewage treatment on trains.

About 550 kilometers of the 1,956-km railway's track is laid on permafrost, frozen soil, sediment or rock. Permafrost is defined as ground that stays frozen for at least two years. When the railway was proposed, concerns were raised that the heating systems that keep the track clear of ice and snot might melt the permafrost and affect the integrity of the track.

Solution－Dong Tianchun, an engineer at Qinghai-Tibet Railway Co who specializes in permafrost technology, said engineers solved the problem by elevating the track with pile-driven foundations sunk deep into the ground in permafrost areas. In other places, a total of 10,829 heating pipes are buried underground.

The Qinghai-Tibet Plateau, often referred to as the roof of the world, sustains species of Tibetan antelope, snow leopards and wild donkeys. For thousands of years, these species have lived in the least-accessible areas and are sensitive to disturbance. Some people worried the animals' seasonal migration patterns would be influenced by the railway. Tibetan antelope calves are normally born in early June. It now appears that the environmental impact on plateau wildlife has seen better-than-expected results.

Solution－Yang Haijiang, a railway planner, said 33 animal passages were built along the rail section from Golmud to Lhasa－58 kilometers. "In 2006, only 56.6 per cent of the animals used the passages," Yang said. "But monitoring shows that 100 per cent of the wildlife uses the passages in the area of their migratory route since 2011. They cross the passages swiftly and in small groups. They would only come in large herds if they were nervous. So this also shows that they have gotten used to the noise and vibration of trains."

On many rail lines, attendants lock the restroom when the train approaches a station to avoid waste leakage and pollution. However, passengers can use restrooms anytime on the Qinghai-Tibet Railway. All waste on board is offloaded and taken away by trucks at certain stations, including Golmud and Lhasa.

Solution－Wang Qiang, an engineer at China CNR Corp, said trains on Qinghai-Tibet line are forbidden to discharge waste along the route. Trains stop at three stations, Xining, Golmud and Lhasa, and discharge collected sewage through the use of a vacuum-equipped truck.