Lion Air crash: 'I want to bring my husband home no matter what' 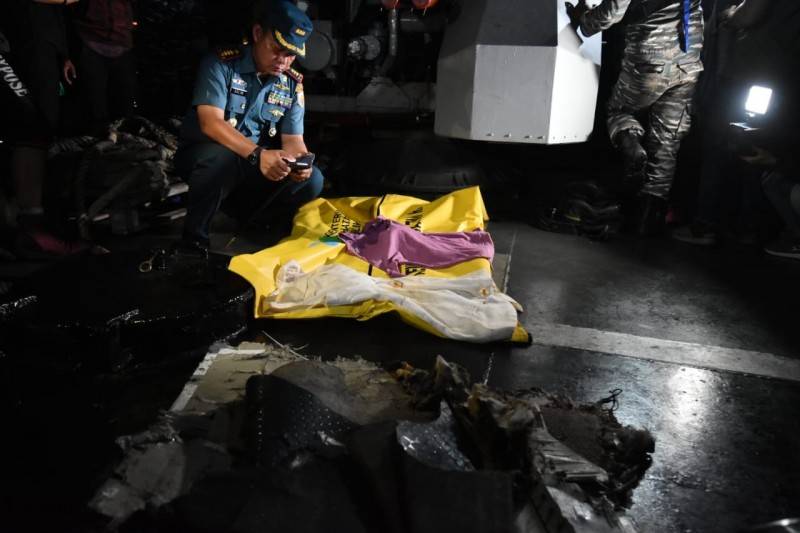 The commander of Patrol Vessel Armada of Jakarta Naval Base III, Col. Salim, inspects a body bag in Tanjung Priok Seaport in North Jakarta on Tuesday. The remains are suspected to belong to victims of the Lion Air flight JT610 plane crash.
The Jakarta Post/Asia News Network

The wife of Ahmad Endang Rokhmana came to a harbour at Tanjung Priok Seaport in North Jakarta from Tasikmalaya, West Java, to search for her husband’s belongings.

The harbour, Jakarta International Container Terminal 2, is the first place National Search and Rescue Agency (Basarnas) personnel bring the debris of the plane and the remains of the victims of Monday's Lion Air flight JT610 crash before they are taken to Kramatjati Police Hospital in East Jakarta.

“I’m looking for my husband’s ID cards. I want to see the proof [that he was in the crash] Basarnas could find,” Siti Nuraini said as quoted by kompas.com.

She said she came with her child and two in-laws from Tasikmalaya to Jakarta on Monday. She had gone to the Kramatjati Police Hospital to give information to help identify her husband.

“I want some certain news as soon as possible. Whatever happens, I want to bring my husband home to Tasikmalaya,” she said.

Endang was a civil servant at the Finance Ministry, stationed in Pangkalpinang, Bangka Belitung Islands. He came home once every two weeks to be with his family.

Siti said the last communication between her and Endang was on Monday morning when he told her he had arrived at Soekarno-Hatta International Airport.

Head of the National Police Medical and Health Center, Brig. Gen. Arthur Tampi said on Tuesday the disaster victim identification (DVI) team had collected 147 DNA samples and 185 items of antemortem data from the families of the victims as of Tuesday night.

“We hope that the families can be patient during these times, as it is harder for us to identify body parts than intact remains,” he said during a press conference at the hospital, adding that the process of matching DNA samples with the remains took longer than fingerprint and visual identification.

Meanwhile, the South Sumatra Police in Palembang have opened an antemortem and DNA post for the relatives of seven victims hailing from the province.

He said only the relatives of Reski Amalia had come to Bhayangkara Police Hospital in Palembang.

“Other relatives can go to [Palembang], they don’t have to go to Jakarta. We will send the data to Jakarta,” he said.