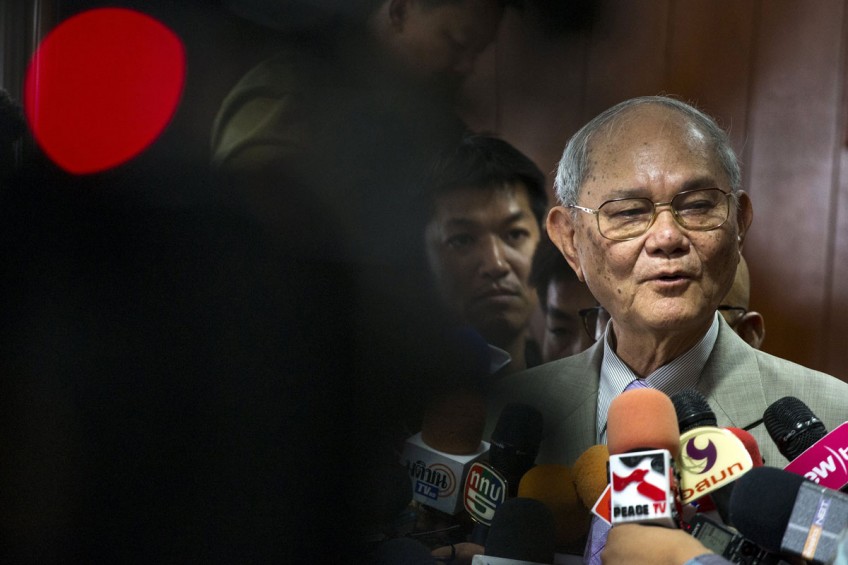 CHARTER drafting chief Meechai Ruchupan has stood firm over the requirement that parties list candidates to be prime minister, saying it is not a door for a non-elected PM.

The top government job would be determined by a three-stage process involving political parties, voters, and the House of Representatives, he said.

"It was a misunderstanding that people said this [the PM list] would be for an outsider [non-elected] PM," he said. "Those who can choose the candidate are firstly the party, then the voters, and lastly the lower House."

Meechai reiterated that the aim of the proposal was for voters to know beforehand who the candidates to be national leader are.

"It wasn't like we would stipulate in the draft who in particular could become PM," he said.

Last week, the Constitution Drafting Commission and its subcommittee studying executive structures discussed the method proposed for selecting premiers - each party submitting a list of five candidates during election campaigns.

The idea, together with the proposed single-ballot electoral system, drew much criticism. Some politicians view it has an attempt to pave the way for non-MP premier.

PM Prayut Chan-o-cha hit back at critics yesterday, saying true democracy must not be an illusion but getting honest people to run the country.

He said under the proposal, political parties would have the sole responsibility of nominating PM candidates.

He added people should not confuse illusion with true democracy. "We must have a kind of election that gets good people to run the country so that the country is safe and sound and has no conflicts - not hand power to someone who jeopardises the country."

He said if people still clung to conventional methods, they would likely get the same type of leaders.

Meechai said political parties could set out their own selection rules for candidates to be PM. They could set the rule that the candidates must be an MP or a party member.

However, he stressed that they should bear in mind that under the proposed mixed-member apportionment system it was possible for a party not to have a party-list MP if their winning constituency candidates had equalled or exceeded the total seats they could gain and that were calculated to reflect their true popularity.

He said that on the day the PM candidates are proposed by parties, nobody was an MP yet because the process would take place before an election.

Meechai reiterated that whether or not the PM would be an MP was the parties' business. He said the CDC would not stipulate in the charter draft the type of candidate each party should propose, but the qualifications of the candidates could not be less than those of MPs.

The CDC head said that any political creativity put forward by the drafters was to tackle the four major issues facing the country including the public being uncertain over whether candidates had previously been elected for their true popularity or because they had bought votes.

He said there was also a lack of understanding about parties' policies and the direction taken by voters, while voters' voices became meaningless after they cast their ballots.

Meechai said the public viewed politicians as seeking only their own vested interests in a bid to profit from vote buying they had invested in.

The old rules and regulations could not solve those problems, he said, so it was necessary for the current drafters to create new measures and mechanisms to deal with them.