People are not the only ones who may be concerned about getting in shape to meet a potential partner, as it seems to be the aim of lizards who hope to meet their mates.

According to the owner of a 1.9 meter lizard named Momon, who grabbed the attention of many during Car Free Day in Central Jakarta on Sunday, he recently rationed Momon's daily food intake to only 1.5 kilograms of chicken every four days because he needed to lose weight to be able to mate with a female lizard.

"He eats 1.5 kg every four days because he is on a diet. He used to eat more than 2 kg of chicken, that's why he got so long and big like this," the owner, Dais, said Sunday as quoted by kompas.com.

He said that he put Momon on a diet because he wanted to mate him with a female lizard. 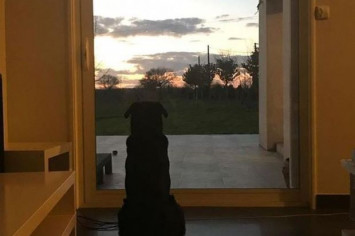 "I want to release him once he reproduces. I tried to mate him with female lizards but failed because he was bigger than the female. Ideally, male lizards should be smaller than female ones. So he needs to be on a diet," said the resident of Rawamangun, East Jakarta.

Dais, who is a member of the Jakarta King Reptile Community, said that he had caught Momon in the Pesanggrahan River, South Jakarta, in 2014, when Momon was 90 centimeters long.

"I named him Momon because he is a male. If he was a female, I would've name him Mumun," Dais said, adding he decided to keep Momon to ensure his safety.

"We [Jakarta King Reptile Community] have always caught lizards. We take care of them until they mature and then release them back into their habitat. I'm just sad that there are those that catch lizards for food. That's why the community and I want to take care of the small ones," Dais said.