Hongkongers were up early to cast their vote in the first public election since the mass protests broke out in June, with young people among those waiting in long queues before polling stations opened.

A record 4.1 million Hong Kong residents are registered to vote in the district council elections on Sunday, when 1,090 candidates contest 452 seats.

In 18 districts across the city, they will directly elect councillors, who handle community-level affairs such as transport and public facilities.

But the elections are widely seen as a barometer of support for the anti-government protest movement and Chief Executive Carrie Lam Cheng Yuet-ngor's leadership.

After voting at Raimondi College in Robinson Road, Lam said many Hong Kong people hoped the calmness in the city over the last few days could continue after the polls.

"In recent days we have seen society returning to peace. Many residents expressed that they value this calm on social media or other platforms," she said after voting.

"I hope this stability over the last few days is not only for today's election, but I hope it means everyone does not want such chaos in Hong Kong, and we can leave these difficult times so that we can start afresh."

The turnout rate for the first hour of polling was three times higher than for the same period in 2015, when only 39,900 people, or 1.28 per cent, had voted. 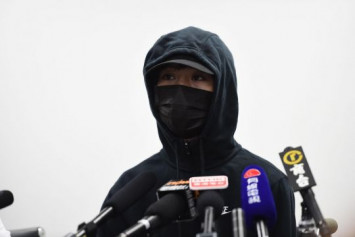 The city's first post-handover leader Tung Chee-hwa said citizens must use their vote to reject the behaviour of "rioters".

"The past few days we have seen brave citizens collectively clean up the city's streets," he said at a polling station in Hong Kong Park Sports Centre.

"This is saying no to rioters. No matter what reason, rioters cannot destroy Hong Kong, so we must keep saying 'no, no, no'."

Messages circulating online called for people to vote early amid rumours that "emergency situations" could force polling stations to close as early as 10.30am, with a final count of the ballots then taken.

The Registration and Electoral Office issued a swift clarification, saying in the event of an emergency, voting at specific polling stations would either ­resume within 90 minutes of the disruption, or be postponed until December 1.

But many young people heeded the calls to vote early.

A 21-year-old first-time voter, who only gave his surname Kwan, arrived at the voting station in Sha Tin Government Secondary School at 7.45am.

"I got up earlier because I saw from social media that the polling station will be closed at 11am, but I have to vote this time, so I got up much earlier than usual at the weekend to vote," he said.

In Tai Kok Tsui, Evan Wong Leung-fung, 23, said it was the first time he was voting in a local election.

"I woke up so early to discharge duty as a Hong Kong citizen, and I chose to come to polling station because there have been rumours that polling stations affected by chaos could be closed, and only those ballots cast beforehand would be counted," he said.

"Although the government has made clarification, I still play safe and came to polling stations in the morning," he said.

At 7.25am, around 50 voters were waiting outside the polling station at Sha Tin Government Secondary School.

A 47-year-old civil servant, who only gave his surname Ng, and his wife were standing at the front of the queue.

Ng, who arrived at 6.45am, said he supported democracy but declined to reveal which candidate he supported.

"If you support democracy, then you sympathise with some of the protesters, but I don't support using extreme means to support goals." Ng said.

He said his life had been affected to a degree by the past six months of protests, but added he found that acceptable.

In Tai Kok Tsui, nearly 300 people queued up outside the Island Harbourview Elderly Club of the Asian Outreach Hong Kong, the polling station of Olympic constituency.

In Central, some 50 people were there early to enter the Hong Kong Park Sports Centre polling station, of Peak constituency, at 7.30am. Most of them were older voters.

Pro-democracy challenger Thomas Uruma Kuninobu, 46, who is of Japanese heritage, was among the early voters.

At least five riot police officers were seen patrolling in the area.

The polls are being held in the midst of the Hong Kong protest crisis now in its sixth month and are seen as a de facto referendum on the handling of the unrest by the government and the stance taken by its allies.

It will have knock-on effects for the Legislative Council elections next year which draw candidates from among the successful district councillors.

Anger against the government and police could erode the dominance of the pro-establishment side and mean more seats for the pan-democratic camp.

The police force has taken steps to ensure the election runs smoothly. The city's new police commissioner, Chris Tang Ping-keung, said on Friday that sufficient manpower would be deployed at all polling stations to guard against interference.

A senior police source said almost all officers in the 31,000-strong force, no matter the division they were attached to, had to report for duty on election day, with 3,000 riot control officers and crime investigators on standby.