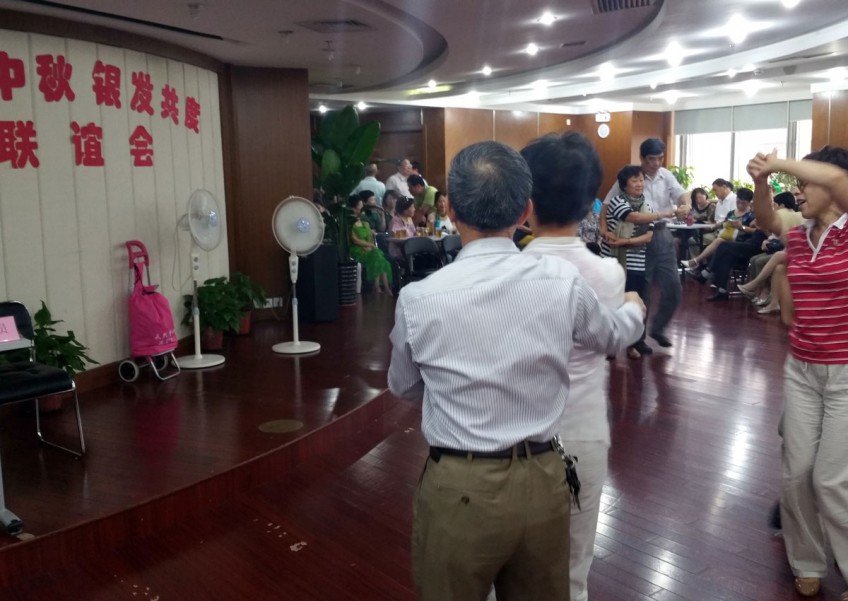 SHANGHAI- The music is playing.

Couples are swaying on the dance floor. Many other participants at a matchmaking event in Shanghai are scanning the function room for potential spouses from the comfort of their chairs.

Love is clearly in the air - although almost all of the 250-plus singleton participants are at least 50 years old and most are divorcees in search of a new, old love.

They include retiree Sun Wenbao, 70, who has been attending the weekly sessions organised by a retirees' activity centre under the Shanghai General Labour Union since 2013, after battling loneliness for seven years following his divorce in 2006.

A former engineering manager and now a freelance masseur, Mr Sun said his ex-wife asked for divorce eight years after their marriage in 1970, but he refused as they had a six-year-old son then.

"I am now looking for the true love that I never had and the love that I deserve," he told The Straits Times moments after he chatted up a female participant and obtained her phone number.

An ageing society, the side effects of a one-child policy that leaves many widowed or divorced elderly people living alone, and increasingly open mindsets towards divorce have led to a spike in the number of elderly singles like Mr Sun across China.

The country has around 212 million people aged 60 and above among its nearly 1.4-billion population, according to data cited by media reports.

That number could reach 450 million by 2055. And the sixth population census conducted in 2010 found that 14.4 million of China's elderly people were single, up from the 7.8 million elderly singles at the fifth census in 2000.

But few cities come close to Shanghai in witnessing and tackling the phenomenon of lonely elderly people.

About four million out of its 14.3 million resident population are at least 60 years old and one in four of the senior citizens is single.

That means the proportion of singles among Shanghai's elderly - at about 25 per cent - is nearly four times the national average of about 7 per cent.

Professor Zhou Haiwang, deputy director of population and development studies at the Shanghai Academy of Social Sciences, said one key reason is the city's longer life expectancy of 82.5 years, the highest across China, which has a national average of 75 years.

As the number of elderly singles grows, so has the demand for matchmaking services in recent years.

The retirees' activity centre, which set up the Yinfa Matchmaking Agency to cater to the elderly, now sees around 250 people at its weekly matchmaking session, up from 50 in 2000, said Ms Zhu Bin, who heads the centre's lifestyle and culture department.

She said Yinfa, which means silver hair in Mandarin, now attracts some 5,000 new members yearly and has a current total of about 50,000 members. Female members are mostly aged 45 to 55, while men are 55 to 80.

The success rate - which is defined by couples getting married or at least living together - is about 20 per cent, said Ms Zhu, adding that it used to be around 10 per cent.

More elderly Shanghai residents have also been thronging the Ikea furniture outlet in the Xuhui district every Tuesday which became, around 10 years ago, an informal venue for them to find new love.

Regulars say they started hanging out at Ikea because there were no other conducive public places in Shanghai then and also because they could enjoy free, refillable drinks through a free membership card.

"The elderly like us have to be careful with our money," said Mr Xu Bing, 69, an Ikea regular for the past eight years.

When The Straits Times visited the outlet recently, there were around 150 of them at Ikea's second-floor cafeteria, getting to know one another better or just chatting with the regulars.

But unlike those organised by certified matchmaking agencies that require participants to show documentary proof of their singleton status, there is no way of telling whether those at the Ikea outlet are single and genuinely want to settle down.

Some interviewees expressed their wariness at hooking up with those people and said their original goal of finding love has now been replaced by a need for social interaction.

One of them is Ms Gong Mingfang, 63, who started hanging out at the Ikea outlet in 2009, a year after her husband died.

"Meeting people regularly, instead of cooping myself up at home, has definitely helped me stay healthy," she added.

Ms Zhu said more elderly people are seeking love as sensitivities over elderly love are being shed these days, thanks to more open mindsets.

"Also, there is a greater need for companionship among this generation of elderly who mostly have one child, which means they are usually living alone if they have divorced or been widowed," she added, referring to China's one-child policy, which began in 1979 and limited most couples to having only one child to control population growth.

Still for some, finding a spouse at their age is something they prefer to keep under wraps, with several at the Yinfa event protesting fiercely to this reporter at the possibility of their photos being taken.

Their children's objection is another key factor for their reticence, though most say they have support from their families.

A female participant, 53, who wanted to be known only as Ms Liu and who declined to give her occupation, said it was her first time at a matchmaking event after getting divorced in 2005, though her daughter has been encouraging her to attend.

"Loneliness can be quite unbearable, especially after my daughter moved out. But it is quite embarrassing to be looking for a new love at my age," she told The Straits Times.

Lawyers say that Chinese laws do not allow children to stop their parents from remarrying. Sociologists say it is unfilial if children's objections stem from their concerns of getting a smaller share of their parents' assets.

Also, observers say the lonely elderly phenomenon is part of a ticking demographic time bomb - along with gender imbalance, declining birthrates and a shrinking workforce - that needs to be addressed to prevent knock-on social and economic consequences.

Prof Zhou cited problems such as the elderly falling prey to sex crimes and a rising infection rate in sexual diseases.

A study by China's health ministry and the United Nations showed the Aids infection rate among Chinese men aged at least 60 years old rose from 2.2 per cent in 2005 to 8.9 per cent in 2010.

"There is a higher healthcare burden on the state if more of the elderly remain single instead of having someone to care for them," he added.

But it is not easy to pair up China's senior citizens. As society opens up and economic conditions improve, the elderly's priorities have changed too.

Ms Zhu said single elderly women used to have one main criterion: The man must be able to provide a roof over their head.

"But now that most have no financial problems, they are looking for emotional fulfilment," she said.

Interviewees say they are not picky and all that matters is to have "yan yuan" with the partner. The term, which means "pleasing to the eye" in Mandarin, refers to having chemistry.

But when pressed further, they also list other factors such as owning at least one property in Shanghai, age and whether the potential partner's children are already married or are single.

Mr Sun said he had rebuffed interest from female participants, including one who invited him on an all-expenses-paid holiday in China, because they lacked "yan yuan".

"Why can't I be picky? I'm looking for someone I would have to live with for the rest of my life. I need to make sure it is someone I want to look at every day," he said.

Observers say it is important to help the elderly find love by providing screening services and safeguards to assure them of the suitability of potential partners.

Mr Fang Qiang, 44, who heads the Yinfa matchmaking agency, said the success rate is higher among rookie love-hunters, especially those who take up the agency's services in matching them to potential partners based on their profiles.

"The more they come and the more they interact with other regulars, the likelier it is they will become pickier," said Mr Fang, adding that he would even advise participants to skip the weekly event and focus on matchmaking services.

"It's gratifying to see the elderly find love or companionship because it's not easy for them to accept someone new at their age. And those who are lucky do live happier lives."