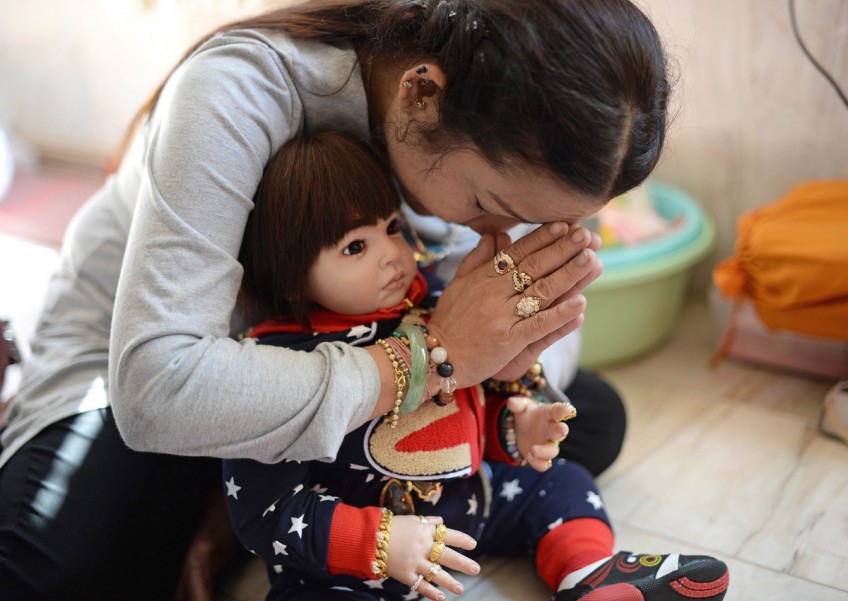 Driving to a Buddhist temple on the northern fringes of Bangkok, beauty salon owner Natsuda Jantaptim is running through her youngest daughter's likes and dislikes.

"We sleep in the same bed together, she has her own pillow and blankets," she told AFP, her daughter sitting quietly in the front passenger seat.

"We didn't switch the air-con on two nights ago because she was cold. In the morning, she likes to drink strawberry milk," she added.

On first reckoning, it sounds like the everyday observations of a dedicated mother.

Except the daughter Natsuda refers to isn't real. Certainly not in the living, breathing flesh and blood sense.

She is a meticulously groomed plastic doll, part of the latest celebrity-fuelled superstitious craze that has swept the country - much to the dismay of the kingdom's conservative military rulers.

Known in Thai as "luuk thep" (child angels), the pricey dolls, which can cost up to US$600 (S$854), were first popularised a little over a year ago by celebrities who claimed dressing up and feeding the dolls had brought them professional success.

Believers say the dolls - many of which are blessed and have sacred scripts drawn on them by a monk - contain the spirit of a real child and must be treated as a living being.

The theory runs that those who look after their dolls like members of the family will see good fortune returned to them.

As a result, plastic dolls are now taking their seats at restaurant tables, cinemas and even on airplanes.

But that has not dimmed her affection for the doll, auspiciously named 'Ruay Jang' (So Rich).

"Since I got 'Ruay Jang' my life has really changed. For example I won the lottery which I had never won before," she explained.

After praying for help from her doll, she added, a friend paid back a significant loan after years of fruitless efforts to chase it down.

Asked what she would say to those who think her credulous she replied: "It's a personal belief, I cannot blame those who don't believe in it but I believe in what I worship." In many ways Thailand's child angel craze is simply the latest manifestation of a deeply superstitious society that places enormous emphasis on warding away bad luck and making good merit.

More than 90 percent of Thais identify themselves as Buddhist. But the country's Buddhism is known for its syncretism, comfortably blending many animist and Hindu traditions into daily worship.

Many Thais fervently believe in good and malevolent spirits - and that offerings or the latest lucky charm will ward off bad karma.

In the late 2000s a style of large amulet became the latest "must have" item - often selling for thousands of dollars each - following the death of a popular police officer who claimed the charms helped him solve a murder case.

The luuk thep craze appears to have divided Thais.

Some see it as a natural extension of their merit-making traditions while others deride it as a commercial ruse and symbol of the dumbing down of Buddhism.

"I freak out sometimes when I see them on the train," admitted Lakkhana Ole, a 31-year-old graphic designer from Bangkok who says she spots dolls increasingly often around the city.

A poll this week by Bangkok's Suan Dusit Rajabhat University found two thirds of Thais saw the dolls as something positive if it gave them direction or helped alleviate loneliness.

But the same poll also found that 72 percent of respondents dismissed them as the hocus-pocus of overly superstitious people.

"It reflects that society is perverse," Phra Buddha Issara, a conservative nationalist monk, famous for his fiery denunciations of commercialism with mainstream Thai Buddhism told AFP.

"If you're lonely... you can just go out and talk to your neighbours, interact more with others, do good things for public, help the blind, sweep floors or grow plants," he added.

Asked if he would he bless someone's doll he replied: "The only thing they would receive from me is: 'Damn you, you idiot." Issara's criticism has been matched by Thailand's justice minister, a former general, and the country's top police officer, both of whom have publicly fretted that the craze is getting out of control.

Phra Ajarn Supachai, a monk in Nonthaburi's Bangchak temple has no such qualms. He regularly conducts prayer sessions for luuk thep dolls and their owners - for a donation.

"People began turning up with the dolls about three years ago," he told AFP. "Now we get around ten people a week." Natsuda's friend Mae Ning is a regular.

Last week she took Natsuda to chant prayers as the saffron-robed Supachai anointed all those present, dolls included, with a stick soaked in sacred water.

Mae Ning, an avid collector and trader in luuk thep dolls, believes many Thais are looking for comfort in uncertain times.

"Some people are stressed about Thailand's bad economy, its politics, their jobs and finances, so they want something to attach to," she explained.

"When people have the dolls, they feel that they are happy just like they are in another world."

Natsuda, admits many find her attachment to Ruay Jang unusual.

"But honestly I don't care because what I do doesn't cause anyone trouble," she said.