More than four in five consumers across Asia-Pacific hope T-shirts, shorts and yoga and jogging pants are here to stay in offices, as companies adopt hybrid or flexible work arrangements, according to a survey conducted by fitness apparel maker Lululemon Athletica.

Of the more than 6,000 individuals surveyed, 96 per cent said comfort was their priority when it came to choosing clothes. And with more companies allowing employees to work from home or choose remote work, 84 per cent said they hoped casual clothing becomes more common in workplaces.

"The results of this survey reinforce Lululemon's belief that wearing clothes that make you feel good is non-negotiable," said Sun Choe, chief product officer of the Vancouver-based and Nasdaq-listed company. "The data provides long overdue recognition that professional work wear can and should be functional, versatile and comfortable. And when it is all three, it can positively affect performance, confidence and more."

When the coronavirus pandemic spread last year, companies across the globe were forced to allow employees to work from home, ushering in one of the world's largest experiments about work practices. And with workers becoming used to online meetings and remote work, where less formal attires were unlikely to raise eyebrows, a full or partial return to offices could potentially mean a disruption to this new-found freedom and comfort for many employees.

In a nod to the growing appeal and versatility of athletic wear, brands that are not traditionally associated with the segment have been acquiring "athleisure" companies to be more competitive.

Last month, jeans maker Levi Strauss and Company announced that it was acquiring US-based athletic and lifestyle apparel company Beyond Yoga for an undisclosed amount. The acquisition was expected to add more than US$100 million (S$135 million) to Levi's net revenue.

In Hong Kong, while fashion retailers have been struggling since 2019 when the city was hit by its worst protests, and then last year by the pandemic, sporting and fitness goods retailers have been taking up empty retail space, which suggests that the business was picking up. 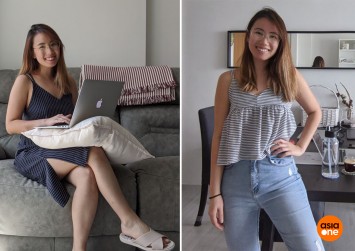 The results of the Lululemon survey highlight how the pandemic has affected even clothing preferences among workforces globally. The survey was conducted in 11 markets - Australia, Canada, France, Germany, Hong Kong, Japan, mainland China, South Korea, the United Kingdom, the United States and Taiwan - in August. Its samples included young workers or those categorised as Generation Z and millennials.

Dressing in a more relaxed way instead of donning suits, blazers, jackets and trousers in the office also helps employees foster better connections with colleagues, inspires respect for companies that are more flexible about work wear, and even helps save money, as they shop for clothes that they can wear both at and outside work, according to the survey.

The Lululemon poll also found that younger workers were more inclined to dress more comfortably. For instance, in Taiwan, it found that more than half of millennial men were not looking forward to dressing professionally again when they return to their places of work.

The survey results were significant for Lululemon, which is aiming to quadruple its international revenue, where "Asia-Pacific plays an important role". In the second quarter of this year, its net revenue from company-operated stores rose by 142 per cent to US$695.1 million. Its net revenue in North America increased 63 per cent, while its international segment grew 49 per cent.