Officials from mainland China have introduced a temporary checkpoint on one of the artificial islands connected to the bridge between Hong Kong and Macau.

Matthew Cheung Kin-chung - acting as city leader with Chief Executive Carrie Lam Cheng Yuet-ngor in Beijing - was commenting on the case of Chung Sun-ming, a 53-year-old detained on Friday and accused of smuggling offences as he tried to cross to the former Portuguese colony.

A Hong Kong journalist was separately barred from the city on Monday. Both incidents happened at a newly installed temporary checkpoint on the Hong Kong-Zhuhai-Macau Bridge.

"It is perfectly justified for [mainland authorities] to exercise jurisdiction within their own territory. It's entirely legal," Cheung said.

Located on an artificial island in mainland waters not far from Hong Kong's Lantau Island, the checkpoint was introduced ahead of President Xi Jinping's visit this week to mark 20 years since Macau's return to Chinese rule.

The checks appeared to deviate from an agreement adopted by the Hong Kong, Macau and mainland governments, which stated no security checks were needed on the island.

But Cheung said the temporary set-up and the arrest had not violated the arrangement.

"This is an operational matter on the part of mainland authorities so I'm not prepared to comment on it," he said, ahead of a meeting with the city leader's cabinet, the Executive Council.

Cheung also urged the public "not to over-interpret the matter", saying the checkpoint would only be in place for a few days. The Zhuhai public security bureau said previously the arrangement - intended to "create a good social environment" for the anniversary celebrations - would last from December 10 to 22.

Also stopped at the new checkpoint was Jack Tsang, a reporter from Hong Kong's Now TV News held for more than two hours before being told he was denied entry to Macau "for the next few days", according to an account published on the news company's website.

A photographer from the same media outlet, who was travelling with the reporter, was allowed to enter. Both journalists had registered with Macau authorities in advance, the television network said. 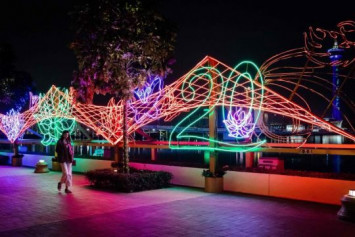 According to Now News, the two journalists got to the checkpoint at 2.45pm on Monday.

The reporter was searched and photographed before being put on a coach back to Hong Kong at 5.30pm, the broadcaster said.

Now TV said it would still send reporters to Macau on Wednesday.

The company said it did not believe the refusal had anything to do with the station's coverage of the anti-government protests in Hong Kong, because its photographer was granted entry.

Mainland officials confirmed the detention of a Hong Kong man at the same checkpoint on Monday.

On December 7, the chairman and president of the American Chamber of Commerce in Hong Kong, Robert Grieves and Tara Joseph, were also denied entry to Macau and detained for several hours without any public explanation.