A worker inspects marijuana leaves and care for plants at the Rak Jang farm, one of the first farms that has been given permission by the Thai government to grow cannabis and sell products to medical facilities, in Nakhon Ratchasima, Thailand, on March 28, 2021.

Thailand's health minister has said Malaysia is considering studying its laws to legalise cannabis for medical use as Kuala Lumpur plans to roll-out a similar measure.

Anutin Charnvirakul said on Monday (Aug 15) that he shared knowledge about the herb with his Malaysian counterpart Khairy Jamaluddin during the 75th World Health Assembly in May.

The two ministers hope to take the discussion forward when Khairy visits Thailand in November to attend the Asia-Pacific Economic Cooperation (Apec) summit.

Anutin added his ministry would organise a medical marijuana tour for Khairy to study the extraction of cannabis cola or clustered flowers that can be used for medicinal purposes.

"If Malaysia joins Thailand in legalising cannabis for medical use, even though our neighbour has much harsher narcotics laws than Thailand, I believe that would reflect well on our success in bringing the plant into our medical system," Anutin told the Bangkok Post.

In June, Thailand became the first Asian nation to decriminalise cannabis for medical and industrial use after the plant was removed from the narcotics category by the country's food and drug administration.

The move spurred businesses such as cafes and stalls to start openly selling all kinds of cannabis products, but it has also raised concerns about the dangers of unchecked use.

New regulations were later announced banning the smoking of cannabis in public, including in schools, and limiting who can legally buy it. Those excluded include pregnant women, breastfeeding mothers and anyone under the age of 20.

Critics say the government rushed to remove criminal penalties on cannabis before it had passed a law to ensure the drug's use was still regulated.

Malaysia's health ministry in April said it was ready to work with industry players to conduct clinical trials on products containing cannabis extract for health purposes.

A parliamentary committee on medical marijuana met the same month to discuss policies to develop the US$14 billion (S$19.3 billion) global industry. 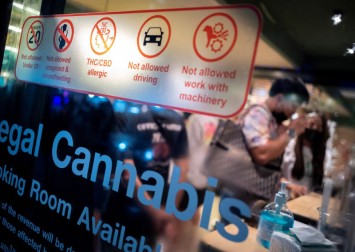 "The hemp, kratom﻿ and the medical cannabis industry is being vastly developed in many countries around the globe. Even Thailand is studying to develop their own industry," the panel said in a statement after the gathering that was attended by Prime Minister Ismail Sabri Yaakob.

"More than 40 countries have legalised consumption of cannabis for medicinal purposes. The caucus believes that Malaysia has the space and a huge opportunity in this industry for medicinal and research purposes which could deliver a lot of benefits for the country," it added.

Under Malaysia's Dangerous Drugs Act 1952, the possession of cannabis is an offence punishable with a jail term of up to five years or a fine not exceeding 20,000 ringgit (S$6,200).