The suspect was identified as part-time worker Yujiro Iimori, 33, of Shinagawa Ward, Tokyo.

OSAKA - A man was arrested on Monday (June 17) morning on suspicion of attempted murder over the stabbing of a police officer in Suita, Osaka Prefecture, the previous day.

Following the attack on the officer, whose handgun was also stolen, police found a man suspected of fleeing the scene in a nearby city in Osaka Prefecture. The suspect was identified as part-time worker Yujiro Iimori, 33, of Shinagawa Ward, Tokyo. Iimori had the handgun with him when Osaka prefectural police arrested him.

According to police, Iimori denied the allegation of attempted murder. They will further investigate his possible motives and other elements of the case.

Iimori is suspected of attempting to murder on-duty policeman Suzunosuke Kose, 26, by stabbing him in the chest in a parking space of the Senriyama police box in Suita at about 5.38am on Sunday, police said. Iimori is also suspected of stealing officer Kose's handgun, loaded with five bullets.

Officer Kose is unconscious and in critical condition.

In response to questioning, Iimori reportedly said: "That's not something I did. I think it happened because my illness got worse and the people around me got worse." 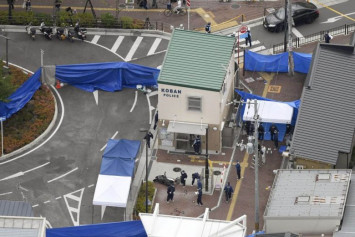 Iimori has remained silent on the subject of his identity and refuses to sign a written record of the questioning.

According to the prefectural police, Iimori has received psychosomatic treatment and was issued a mental disorder certificate. The police will examine whether Iimori can be held criminally responsible.

Iimori lives with his parents in a condominium in Shinagawa Ward, and once lived in Suita. Some information suggests that he served in the Maritime Self-Defence Force from April to September 2009.

Investigators found Iimori lying on a bench in a forest in Minoo, Osaka Prefecture, and arrested him at 6.34am on Monday. The bench is about 8km north of the police box. When arrested, Iimori had approximately ¥100,000 (S$1,266) in cash and his driver's licence. There was a plastic bag underneath the bench containing the police handgun.

There were signs that one bullet out of five had been fired. At about 6am on Sunday, immediately after the attack, an explosive sound was heard in a residential area near the police box. Police are investigating the possibility that Iimori fired the gun while fleeing from the scene.

A suspicious man was recorded wandering around by a security camera at the Senriyama police box before the attack, and the prefectural police released a screen grab from the footage.

Iimori's father, an executive at Kansai Television, contacted the police, saying, "(The man in the screen grab) looks like my son."

A hotel in Suita also reported to police that a guest who stayed there last Friday night appeared to be the man in the image.

Based on such tips, the prefectural police concluded Iimori was involved in the attack and obtained an arrest warrant early Monday. The police also put Iimori on a nationwide wanted list.

The police collected security video footage from a wide range of areas in a bid to track Iimori's movements, and determined that a man who appeared to be Iimori was heading toward the forest in Minoo at about 8pm on Sunday. The police combed the forest after daybreak on Monday.

Osaka prefectural police chief Takahisa Ishida issued a statement saying: "I am sorry we caused fear among the people in the prefecture. We will try to ascertain the whole picture of the case and proceed with police activities for the peace and safety (of the public)."