A 51-year-old man surnamed Jung leaped from the 12th floor of an apartment building in Uijeongbu, Gyeonggi Province, at around 9.45 a.m. Thursday, after ranting and throwing appliances out the window while naked for over two hours.

According to Uijeongbu Police Station, a report was filed with police at around 7 a.m. by building residents stating that a naked man appeared to be attempting to jump from an upper-level floor.

When police and the rescue unit arrived to the scene, Jung shouted that he was keeping two dead bodies in his home and a fire had broken out. Police later confirmed the claims to be false.

Neighbors told police he broke his window and started throwing items out while ranting from about an hour before their arrival. 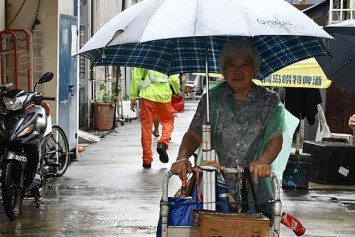 As the SWAT team approached the man, he leaped from the balcony and fell on the air mattress installed by the emergency rescue team, police said. While he broke both legs as a result of the jump, he is in a non-life-threatening condition, they added.

Police booked Jung, who has a record of having been investigated on drug offences, on suspicions of drug use.