A Hong Kong man was arrested on Sunday in connection with an incident a day earlier in which at least HK$6,000 (US$769) in banknotes was tossed from the top of a building in the city's poorest district.

Police detained the suspect in Sham Shui Po at 4pm as he stepped out of a luxury car in preparation for another stunt.

On Saturday video footage filled social media showing bundles of hundred dollar bills raining from a building in the Kowloon neighbourhood while a frenzied crowd tried to lay their hands on the money.

The incident was preceded moments earlier by a man stepping out of an expensive car and asking onlookers if they believed money could fall from the sky.

The stunt was said to be connected to a cryptocurrency the man had been promoting. 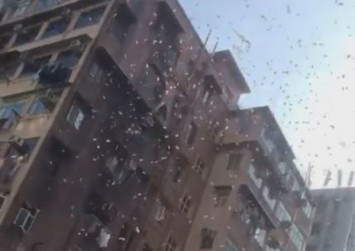 The name of the suspect was confirmed during the arrest as Wong Ching-kit.

Wong, 24, broadcast live on Facebook officers detaining him inside the back of a police van.

"Mr Wong Ching-kit, you have been arrested," a policeman is heard saying in the clip.

The officer did not give a reason for the arrest.

News footage showed Wong was detained while holding a block of banknotes.

Wong announced on Saturday that he would be handing out meal coupons outside a restaurant in Sham Shui Po at 4pm on Sunday, but was detained before doing so.

He was taken to a police station in Sham Shui Po, according to the Facebook Live video.

"I was arrested by the Criminal Investigation Division," Wong says to the camera with a smile.

He then stops filming after police tell him he could face an extra charge of obstructing officers carrying out their duties.

Chong said police believed Wong was behind the stunt on Saturday, adding that more arrests could be made.

"This incident could have been concocted by more than one person," Chong said.

He also said police were not sure how much money was scattered on Saturday.

Asked if those who picked up money could have broken the law, Chong said: "I cannot say if they had broken the law or not, it will be one line of the police's inquiry."

He said members of the public should hand over found property to police, or risk breaking the law.

He is also behind a Facebook page that promotes investment in cryptocurrencies.

Though many grabbed the money that fell from the sky on Saturday, they were soon told by police to hand it over.

A source inside the force said the bills appeared genuine.