The authorities at Khao Yai National Park are continuing to search for a 22-year-old man who had ventured deep inside the park last weekend to reportedly explore supernatural activities.

Park officials are also distributing photographs of Thanatat Tiyapongpattana, so tourists can help locate the man. Hotel operators too have been told to keep an eye out for him, while a sign has been put up at the entrance of the park. Tourist police have also been alerted, in case the man has already left the park.

The missing man has tattoos on his face, short hair and is about 185 centimetres tall. He has about Bt10,000 in cash on his person.

Kanchit Srinoppawan, chief of the national park, said Prathana Wisuthikul, 55, had called on his office to help look for her son, who entered the park last Saturday and has still not returned. She also filed a report with the provincial police. 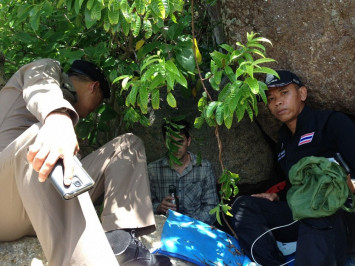 Park officials have checked all natural pathways and camping grounds inside the park, but to no avail. The search will be extended to cover waterfalls later, he said.

Thanatat entered the park on foot and does not have a mobile phone, which makes it difficult for the security system to locate him. The search will continue until he is found, Kanchit said, adding that there is a small chance that he was attacked by wild animals.