The victim of a fire attack last year explained to Eastern Court on Thursday why he chose to intervene in the trashing of a train station by radical protesters.

A construction worker set on fire during Hong Kong’s anti-government unrest last year told a court on Thursday that he was standing up for justice when confronting radical protesters who were vandalising a railway station, but said he was foolish to intervene rather than call police.

The middle-aged man recalled the November 11 attack, which left him with burns covering 40 per cent of his body, at the Eastern Court trial of two people accused of disorderly conduct in the lead-up to that incident.

Unidentified radical protesters set the man ablaze in the New Territories in one of the most notorious episodes of last year’s anti-government demonstrations, after he challenged their behaviour.

The father of three told the court on Thursday that he was hit over the head when he tried to stop black-clad protesters from smashing glass windows and damaging facilities at Ma On Shan MTR station on November 11.

He said he started to chase them but became involved in a scuffle with passers-by on a footbridge outside Ma On Shan Plaza, who he accused of blocking his path.

The court heard the row took a turn for the worse when hardcore protesters suddenly appeared from behind the residents to pour flammable liquid on the man and then set him alight.

He spent three months in hospital and relied on his wife and children for a living because he was unable to work, magistrate Arthur Lam Hei-wei was told.

The man, who was granted anonymity over doxxing fears, said he was angry at the people who were in his way on the bridge and pointing their fingers at him, so he stayed there to argue with them.

He said he also believed it was safer to stay in a crowded place in case someone wanted to assault him.

But the subsequent attack proved the decision to challenge the radical protesters himself instead of calling police was unwise, he added. 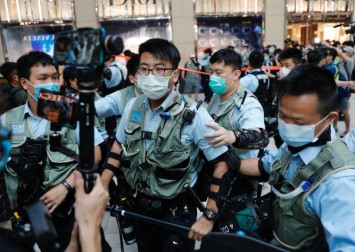 "In retrospect, I was foolish indeed,” the man said.

The November attack came amid one of the worst months for protest-related violence last year, when activists staged citywide strikes, repeatedly paralysed the transport network and clashed with police at university campuses and elsewhere.

Sparked initially in June last year by the now-withdrawn extradition bill, the protests developed into a wider anti-government movement.

While police have yet to identify the culprits behind the fire attack, they arrested Kwong Yiu-man, 39, and Chan Hoi-wan, 34, seven days after the incident over the verbal confrontation beforehand.

Kwong and Chan, who are husband and wife, have denied one joint count of behaving disorderly in a public place.

Video footage played in court saw a gathering crowd directing profanities at the man in a green T-shirt, while a female voice was heard saying: “Get lost. Go back to the Greater Bay Area.”

In reply, the man said: “So you are all helping the black-clad people. You all should die. You all are not Chinese.”

Despite the defence confirming their clients’ presence at the scene, the man said in cross-examination that he was unable to identify the specific acts of the couple because he was surrounded by so many people at the time.

He said he was unable to tell whether the female voice belonged to Chan either, but said he recognised it as the same one telling protesters to run when he was at the railway station.

The trial continues on Friday, when the defendants will decide whether to testify in court.