Man walks into town with bloodied slain son in his arms

A Myanmar man is in police custody in Tak after allegedly slashing the throat of his six-year-old son.

The divorced man was a single parent. Residents of Mae Sot district seized Moung Pu, 52, and handed him over to police at 8am Wednesday when he was seen sitting in front of a learning centre on Mae Sot-Phra That Phadaeng Road, the boy's blood-soaked body on the sidewalk next to him.

Police followed the trail of blood 300 metres to the man's house.

Moung Pu's mother-in-law Maina, 60, told police he'd been divorced for more than a year and was taking care of his son alone. His ex-wife was working in Bangkok. 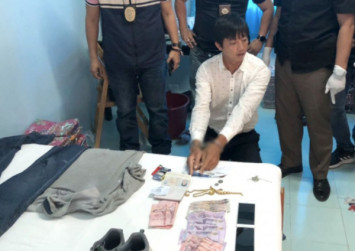 Maina said Moung Pu he had several times declined to let her take care of the boy, saying he was too attached to him.

Maina did not know why he would have killed his son because he loved him so much, but she said he was an alcoholic and a chronic gambler.

She speculated that Moung Pu was carrying his son to a hospital but stopped upon realising the boy was already dead.

The sight of the man carrying a bloodied youth shocked parents and their children on their way to a school in the area.