The sentence of Yu Xiaodong (centre, on phone), for deliberately pushing his wife off a cliff was reduced to 10 years after a second trial in Thailand.

A court in Thailand reduced a life imprisonment sentence for a Chinese man who pushed his pregnant wife off a cliff to 10 years on Tuesday (May 25).

The woman, named Wang Nan, who survived the 34-metre (112-foot) fall but was severely injured, said she would appeal the case to the Supreme Court of Thailand after receiving the judgment of the second hearing.

“I was so shocked by this decision that I could not eat or sleep. I cannot accept it at all,” said Wang, who aborted her baby due to multiple bone injuries from the fall in June 2019. She still struggles with the physical effects of the injuries.

The husband, Yu Xiaodong, made a legal appeal against an attempted murder conviction handed down last year.

Wang’s lawyer, Shi Datuo, said the judge in the second trial reduced the punishment because there was not enough evidence for intentional murder. The man was convicted of an attempted manslaughter charge instead.

“The appeal court has failed to do thorough fact checks and lacked analysis of detailed evidence,” Shi said.

ALSO READ: Woman pushed by her husband off a cliff in Thailand while pregnant forced to abort child and struggling with severe injuries

Wang said that Yu had denied all charges and all evidence presented to the court during the first trial, including a tape recording of a conversation between him and Wang where he admitted he deliberately pushed her.

There was no public hearing during the second trial because it was a review of documents.

“A 10-year-imprisonment sentence means that he will be out in just a few years – he already served two years. And since Thailand is a Buddhist country, he will typically receive a remission. This is such a low cost for killing.

“Following this logic, he would simply inherit my money if I died, or get away with it because I did not die,” she said.

Yu pushed Wang, who was three months pregnant then, off a cliff in the Pha Taem National Park where he had supposedly taken her to see the sunrise on June 9, 2019.

Wang may have survived thanks to a thick layer of trees that slowed her down before she slammed into the ground. 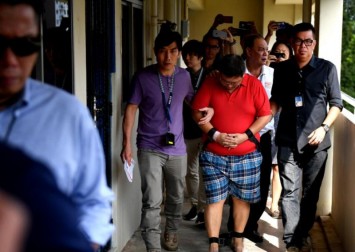 In the lead up to the attack, Yu had been pressuring Wang for money to pay his gambling debts. The local court heard that the attempted murder was a desperate bid to obtain her wealth, in part because Yu was unemployed at the time.

Wang warned it would set a terrible example for the public if Yu received just 10 years in jail. She was not the only Chinese wife in Thailand who had fallen victim to extreme domestic violence to get the wife’s money.

A man from the municipality Tianjin was sentenced to death in Thailand last month for drowning his wife while they were on holiday with their daughter in Phuket in 2018.

The man admitted to his family later that he killed his wife to claim insurance policies worth more than 30 million yuan (S$6 million).

“10 years for trying to kill his pregnant wife? I cannot accept this, let alone the victim herself. And she lost the baby because of the fall. He did kill someone,” one Weibo user commented.