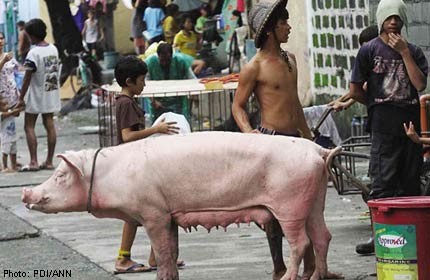 MANILA, Philippines - Even without a permit, he would allow the August 26 Million People March at Luneta, said former president and now Manila Mayor Joseph Estrada.

"It's a free country. (People are) free to express their sentiments. No need to get a permit as long as they ensure that the rally will be peaceful," said Estrada, whose son Jinggoy is among the lawmakers being linked to the pork barrel scam, the main issue behind the expected huge gathering on Monday.

Estrada himself was ousted from Malacañang through a similar mobilization dubbed "Edsa II" in 2001, over allegations that he received payoffs from "jueteng" (an illegal numbers game). He was convicted of plunder in September 2007 and pardoned weeks later by his successor, Gloria Macapagal-Arroyo.

"Even when I was President, I never stopped all those rallies in front of Malacañang. At my first Sona, I let them inside," he recalled during an interview with Inquirer editors and reporters Thursday night.

He was referring to his first State of the Nation Address in 1998, during which he said that the Priority Development Assistance Fund (PDAF), also known as pork barrel, should be abolished.

"Projects should belong to the executive. Legislators are there to make laws," Estrada said.

Asked if he personally knew Napoles, Estrada said, "Before, I saw her in one party."

A Commission on Audit report showed that his son, Senator Jose "Jinggoy" Estrada, had given P191.58 million out of his PDAF to NGOs linked to Napoles.

Asked what advice he would give his son regarding the controversy, Estrada said: "Face the music, just like the way I faced the music."