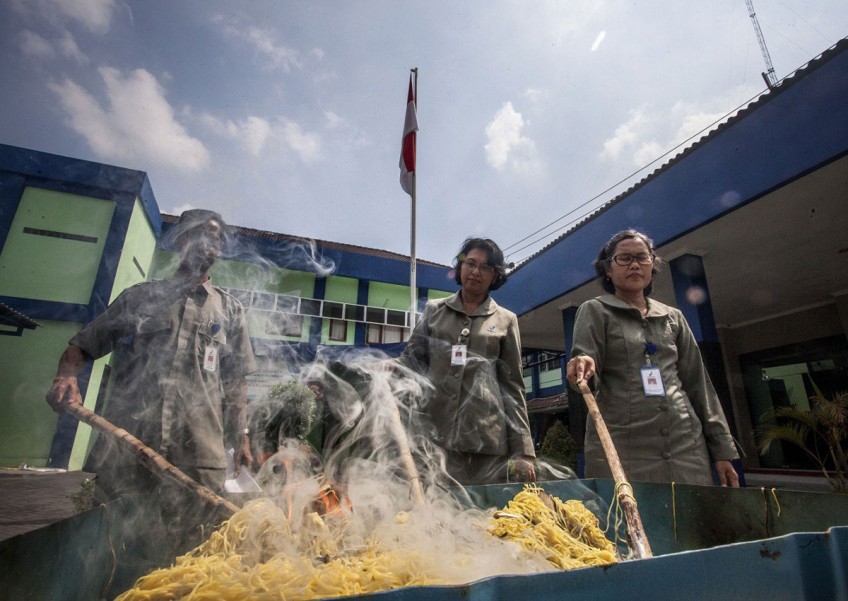 JAMBI - Personnel of the Jambi Food and Drug Supervisory Agency (BPOM) raided on Monday a warehouse used as a location for the production of noodles preserved with formaldehyde in Simpang Rimbo, Kenali Besar sub-district, Alam Barajo district, Jambi.

During the raid, the officers found six sacks of formaldehyde-preserved noodles, which were ready for distribution, weighing 35 kilograms each.

"The results of a laboratory examination on samples of the noodles show the processed noodles contain formaldehyde," BPOM Jambi head Ujang Supriatna said on Tuesday.

He further said that results of the sample examination were strengthened by findings during the raid, during which the officers saw many used formaldehyde bottles inside the factory.

"We suspected the formaldehyde-tainted noodles were distributed in traditional markets across Jambi," said Ujang.

He said authorities were still investigating HD, a Jambi resident suspected to have produced the noodles.

"During the investigation, the perpetrator said the processed noodles were sold at Rp 7,000 (S$0.73) per kg," said Ujang.

The BPOM official further said formaldehyde-tainted noodles were dangerous for people who consumed them.

"If proven guilty, the perpetrator will be charged under Law No.8/1999 on consumer protection," said Ujang.

The law carries a maximum punishment of five years prison time and Rp 2 billion in fines.