Marcos' 'confessions': Philippines president-elect admits to 'trolls', needing guidance - and doing it for his parents

President-elect Ferdinand “Bongbong” Marcos Jnr has admitted using a “troll army” in his election campaign, asking politicians to help him because he is not prepared for the job, and running for the top position for his parents.

Marcos, 64, son and namesake of a murderous dictator who fled his country in 1986, made each admission separately on various occasions after the May 9 election.

He won with 31 million votes, with his closest rival, vice-president Leni Robredo, getting 14 million. Proclaimed the winner on May 25, Marcos will be inaugurated on June 30.

In a YouTube video last month showing him apparently addressing his campaign staff and social media supporters after his victory, he revealed his use of trolls. It was unclear if Marcos knew he was being recorded or if he had anything to do with the release of the footage.

Asked about the video, Jonathan Ong, a disinformation researcher at the University of Massachusetts in the US, said “it looks like it’s a private event and he’s thanking his social media community page leaders”.

In the footage, Marcos says “this really started in 2016”, the year he lost the vice presidential election to Robredo and filed a protest, alleging widespread fraud and claiming mainstream media would not cover the issue. In 2021 the Supreme Court dismissed his protest.

Listing the country’s biggest news sites, Marcos told followers in the YouTube video that “we couldn’t get time from ABS, Channel 7, Inquirer, Philstar, we were being hit by Rappler”.

“So I said the only option that we have is social media, so we concentrated on that.”

He added: “That’s why I hired a troll army, thousands and thousands (libo-libo). Once in a while I contribute. That’s what kept my political fortunes alive.” His YouTube channel, which began in 2009, has more than 2.2 million subscribers and over 107 million views.

Marcos then made a show of calling out to three people in the audience and claiming “that’s my troll army” as he asked them to take a bow.

Ong said he was likely using the “troll army” phrase “in satirical terms referencing the broad discourse about online trolls”.

He added: “What my research emphasises is that technically no politician would admit to hiring trolls; it’s never the official job title. Everyone is hired as ‘public relations associate’, ‘social media manager’, or ‘advertising specialist.’ ”

Ong, author of the report “Architects of Networked Disinformation” , said Marcos’ victory this year “could not have happened without social media, the repository of Marcos’ myth making and folklore”.

Between 1972 and 1986, Marcos Jnr’s father used martial law to create a regime imprisoning, torturing and killing thousands of Filipinos. The dictatorship stole at least US$10 billion from the country and banked it abroad before a peaceful uprising chased the family out. The dictator died in Hawaii in 1989.

According to Ruben Carranza, former governor of the nation’s Presidential Commission on Good Government, the government has recovered up to US$3 billion of the loot and filed numerous cases against the Marcos family. 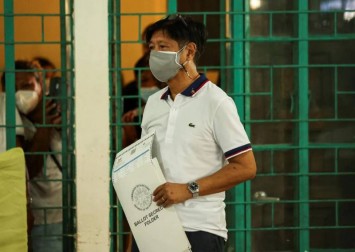 Bongbong himself has been convicted of tax evasion twice and has refused to pay around US$3.8 million in inheritance tax, which he should have paid after his father died.

None of this prevented the unrepentant family re-establishing themselves in power, a decades-long effort supercharged by the arrival of social media.

In recent years Facebook and YouTube have been flooded with accounts glorifying the Marcos brood and churning out lies about the late dictator’s regime, including the claim that martial law was a “golden age”.

Hordes of trolls spread disinformation, helping to scrub and rewrite history, and attack and harass critics and opposition figures.

Ong said that Marcos Jnr’s victory in May “built on long-term investment in social media, which was the primary platform for the family brand rehabilitation”.

According to political analyst Jean Franco from the University of the Philippines, “Marcos’ confessions (in the video) were probably in his mind made in jest, and he thought his supporters were not going to believe him, especially right after he won.”

“However, what he admitted is in line with media investigative reports indicating the presence of an organised troll army that benefited him during the campaign.”

The Marcos media team did not respond to questions sent by the South China Morning Post .

Early on, critics dismissed Marcos Jnr as a lightweight with little ability. While his father – with a law degree and one of the highest ever bar exam scores – had a keen legal mind and was an accomplished orator and writer, Bongbong did not complete his degree and has a shaky knowledge of government.

During the campaign, Marcos Jnr steered away from debates and hard hitting interviews and declined to spell out any platform, mostly focused on repeating the phrase “unity”.

He admitted to his inexperience on the day he was proclaimed winner. The Philippine Star reported at the time that he briefly met political ally, former president Gloria Macapagal Arroyo, and confessed: “You have to guide me through this. I’ve never been through this.”

The next day, meeting friendly journalists, Marcos Jnr was flummoxed when someone asked who he would pick to be ‘SolGen’ – solicitor general, the senior government lawyer.

Clearly baffled by the term, he responded with “sorry?”, then “where?”, then “which one?” when the question was repeated. His forehead knotted in puzzlement, he tried again, asking ‘social welfare?” before a reporter prompted him and he said “ah, SolGen. OK.”

What also became clear was that the incoming president did not have a ready list of candidates for his cabinet. As of June 10, he still has not formed one.

Franco said it was “surprising” that, given that Marcos was “governor and Senator, he still needs training on the finer points in governing”.

In March, Marcos’ wife Louise revealed her husband made the decision to run for president in 2021, after watching the American superhero movie ‘Ant Man’.

But perhaps the main reason why he threw his hat in the ring for top office became apparent the day he was proclaimed winner. He met his 92-year-old mother Imelda, toasted her and said “I did it for you and dad”, shown in a video post on his YouTube channel.

His older sister and Senator Imee told CNN on May 25 what she thought the election was all about.

“What’s most important to us is, of course, our name…the legacy of my father is what we hope will be clarified at last.”