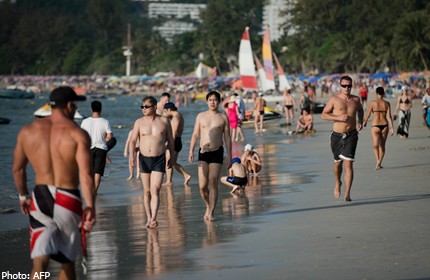 His remarks came following renewed calls for martial law to be lifted, with many tourism businesses arguing that it adversely affects the sector.

"One clear proof [the opposite is happening] is that the number of tourists to Thailand increased 16 per cent in the last six months of 2014 when compared to the first half [of the year], which saw much political unrest and violence," Sansern said.

In the first half of last year the number of tourist arrivals was 11.47 million, climbing to 13.3 million in the last six months, he said.

The spokesman noted that tourism is Thailand's major revenue earner, accounting for about 10 per cent of the country's gross domestic product.

"Martial law has not affected the every day life of honest law-abiding citizens. Instead it helps assure safety for everyone living in Thailand," Sansern said.

He added that martial law was still considered necessary. The spokesman said the authorities were enforcing martial law carefully and only when necessary. "It definitely has not caused uneasiness for innocent people," he said.