Fast food giant McDonald’s has again halted sales of large and medium-sized portions of French fries in Japan, citing problems in its supply chain, although fans have been quick to share a workaround.

The solution for anyone who cannot go without a fix of fries, they say, is simply to order more small portions, even if doing so costs a little more.

On Friday, McDonald’s Holdings Japan announced it would stop selling large and medium portions of fries for around a month from Saturday. The company introduced similar restrictions in late December for a week, citing delays in imports of frozen fries from North America.

McDonald’s says the restrictions are being brought back due to unusually heavy snow in western parts of Canada that has caused havoc with local transport systems and bad weather in the northern Pacific that has delayed shipments.

Those problems have been compounded by staffing shortfalls in Canada as a result of the coronavirus pandemic, flooding in areas close to the port of Vancouver, and a shortage of shipping containers.

The company said it would be impossible to meet demand by bringing frozen fries to Japan by air instead and that the rationing would be in force in around 2,900 restaurants across the country.

But customers have been quick to spot an apparent loophole.

“There are no restrictions on how many small portions of French fries that you can order, so I’ll just order more that way,” said Ayako Ueda, a housewife from Saitama prefecture, north of Tokyo, who admits to an occasional urge for a McDonald’s splurge.

And even without loading up on small portions, “there are plenty of other fast food options in Japan so I don’t think this is really the ‘crisis’ that I have seen people talking about online,” she added.

According to the company’s website, a small portion of McDonald’s fries weighs around 74 grams, the medium is 135 grams and the large is 170 grams. The largest portion costs 330 yen (S$3.80) and the small version 150 yen, so three small portions would come in at 222 grams and 450 yen – significantly more fries but also more expensive than a large pack.

“It does not make any sense to stop selling the large or medium sizes as anyone can just buy several small portions,” said one post on the Yahoo Japan news site. “Would it not make more sense for them to limit customers to just one portion per order?”

More than one cynic has suggested that rationing French fries may simply be a tactic to encourage people to spend more.

“I think it’s an effective promotion because everyone is talking about the problem,” said one message, while another added, “McDonald’s may be driving buyers’ anxiety by trying to sell the small portions.”

On the Japan Today site, a poster added, “McDonald’s getting free advertising for a second time. Smart people in the marketing department!”

Hamburglar-style ploy, or something more serious?

Experts warn, however, that Japan’s French fry shortage underlines a far more serious problem for a nation that relies heavily on imported foodstuffs.

The impact of the coronavirus and related economic problems had once again highlighted the problem, said Martin Schulz, senior economist for the Fujitsu Research Institute in Tokyo.

And that disruption would become far more serious in the event of a military conflict in eastern Asia that threatened shipping lanes, possibly leading to severe shortages of everyday foodstuffs in Japan. 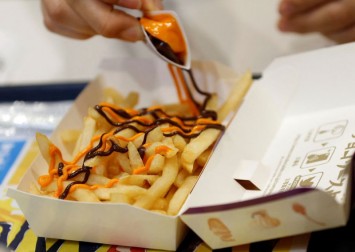 “I expect the McDonald’s situation to be back to normal quite quickly, but this should serve as a wake-up call about the nation’s food self-sufficiency rate,” he said.

“Many countries and regions that supply Japan are having problems delivering agricultural products at the moment – North America, Australia , even Europe – and it must also be pointed out that nearly 90 per cent of the livestock feed used in Japan has to be imported, primarily from Canada.”

In the past, Japanese governments attempted to keep the nation’s food self-sufficiency rate at around 50 per cent, but that had begun to slip, he said.

The most pressing factor had been the rapid ageing of Japan’s agricultural workforce, with not enough young people wanting to take up farming, meaning that consumers were forced to purchase more imports, Schulz said.

Japan had been busy signing free-trade agreements in recent years, Shulz pointed out, which would help to keep prices down, but do nothing to reverse the problem of Japan not growing or raising enough food to feed its population in the event of another, potentially larger, disruption to imports.