Medan prison fire could be arson 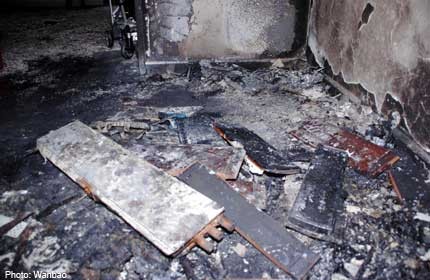 JAKARTA - The Indonesian government said last Saturday it would re-evaluate a 2012 government regulation on prison-term remissions believed to have triggered a prison riot and fire in Medan, North Sumatra.

Investigations by Medan police had found the point of origin of the fire, which indicated arson.

"There is evidence that the fire was set deliberately," Medan police chief Nico Afinta said.

A large number of drug convicts housed in the penitentiary were reportedly upset that they would no longer get remissions and decided to incite a riot. However, the regulation applies only to drug dealers, not all drug convicts, the government said.

Earlier reports said the riot was due to blackouts and water stoppages. The police said an investigation will be conducted to determine both the motive behind the riot and whether it was planned or spontaneous.

As of Saturday morning, the police had recaptured 94 inmates, including five convicted terrorists, and were still hunting down the remaining 118 escaped inmates.

A total of 212 inmates including nine terrorists, escaped from the prison while a fire raged following the riot.