The Communications and Information Ministry has launched an online anti-hoax show in a fresh approach to counter various falsehoods masquerading as truth, especially those found floating around on social media.

The programme is entitled Lambe Hoaks, which takes the Javanese word for lips and means "Hoax Lips". The first video is already available on the ministry's YouTube channel, garnering more than 2,700 views as of Friday evening.

The peppy host, Miss Lambe Hoaks, is seen wearing a fuchsia faux-feather boa and a mask as she sets out to tackle various hoaxes that have been circulating on social media.

"Miss Lambe Hoaks wants to share information because there's more and more hoax information that cannot be accounted for," she flamboyantly says in her introduction to the video before proceeding to debunk 10 hoaxes.

Ferinandus Setu, the acting head of the ministry's public relations bureau, said that the programme is to target a wide range of false information, beyond just those that concern the government. 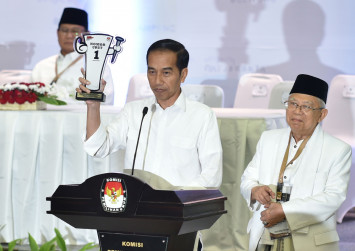 "A complete range of hoaxes, so not just political hoaxes, not just hoaxes that attack the government, but all hoaxes that can be found on social media," Ferdinandus said, as quoted by Kompas.com.

He added that the programme would target hoaxes that are receiving the most attention online.

"Those receiving the highest rate of response, such as those on trending topics," Ferdinandus said, referring to the categorisation of topics on Twitter that are being most talked about.

As Indonesia approaches a presidential election, which is set to take place on April 17, hoaxes are not uncommon on social media. The timing of Lambe Hoaks' launch has led to speculation that the programme was produced to coincide with the campaign period.

Ferdinandus emphasised that Lambe Hoaks is in line with the government's steadfast policy of fighting against false information, denying that it was created as a campaign tool, calling such allegations "not true".

Launched on Jan 24, Lambe Hoaks is a weekly show that is to be uploaded every Thursday on the ministry's YouTube channel.

In each episode, Miss Lambe is to present the top 10 hoaxes culled from the findings of the Content Complaints Team at the ministry's Information Applications Directorate General.

In a bid to innovate and avoid the stuffy and bureaucratic appearance often associated with the government, the show takes an upbeat and energetic tone to appeal to millennials.