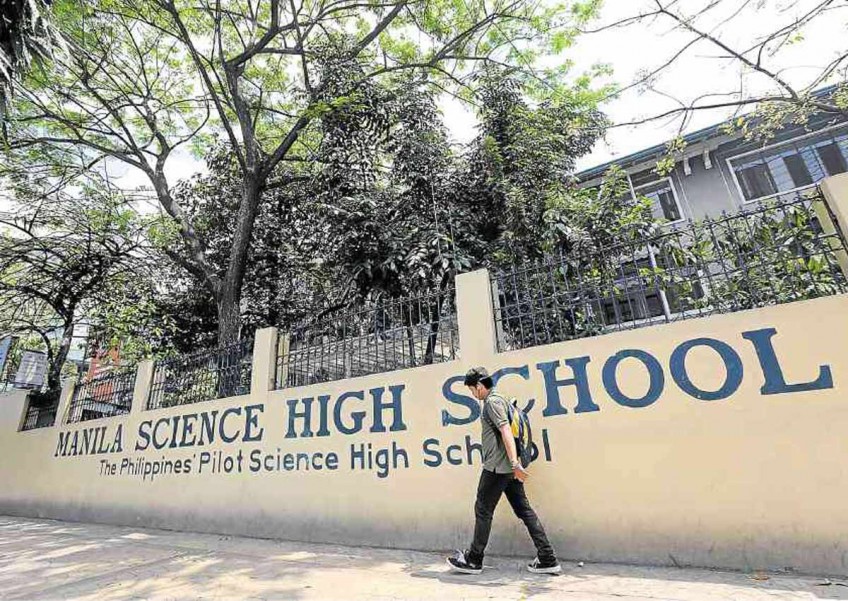 Classes have been suspended since Wednesday at Manila Science High School, 10 days after some students and school personnel were accidentally exposed to "known and unknown chemicals," including mercury, at the chemistry laboratory.

The incident happened on March 11 but was reported by the school principal, Maria Eva Nacion, to Wilfredo Cabral, Schools Division Superintendent of the Division of City Schools in Manila, only on March 21.

In a letter and phone call to Cabral, Nacion said she learned of the matter only on March 19.

But Nacion had yet to submit a complete written report, resulting in some confusion about what really happened, Cabral told the Inquirer on Thursday.

Cabral said that based on what Nacion told him, two students and a science teacher were inside the chemistry laboratory when one of them accidentally broke a container containing mercury.

The three later noticed that several other containers had chemicals leaking out of them.

Nacion said these chemicals could not be identified because these were donated 10 to 20 years ago.

Johnny Yu, chief of Manila's disaster management council, said that based on the information received by the city government, three students, a teacher and a janitor were exposed to mercury after one of them broke a jar containing the chemical.

"We don't know what really happened and there are conflicting reports. We could not get any information from the school," Yu added.

According to him, they learned about the incident from the University of the Philippines-Philippine General Hospital (UP-PGH).

This was after the teacher came in for a checkup, complaining of dizziness, twitching muscles and insomnia.

Yu said that after Nacion was informed about the leak, she ordered the chemical laboratory, which is located at the second floor of the main building, closed.

The entire floor was later declared off-limits until Cabral ordered the main building shut starting March 22 to ensure the safety of students and personnel.

"I also instructed the principal to inform the parents because they deserve to know," he told the Inquirer.

Department of Health (DOH) spokesperson Dr. Eric Tayag said about 300 students, teachers and personnel at the school would have to undergo tests.

"A multidisciplinary team led by East Avenue Medical Center and UP-PGH was deployed to conduct health assessment to be able to identify those with high levels of mercury on samples collected," Tayag announced in a statement.

According to Tayag, the DOH was verifying reports that two individuals had developed skin rashes.

Tayag said the incident happened on March 11 when a cleaning staff accidentally spilled up to 60 ml of mercury in the corridor on the second floor.

"Two samples had levels equal to 107 ng/m3 and 325 ng/m3; reference standard is 200 ng/m3 (Agency for Toxic Substances and Disease Registry or ATSDR). The tests were done by the Bureau of Fire Protection," he added.

"A third-party mercury cleanup services company was contracted by [the] school to start and complete cleanup," Tayag said.

"Mercury spills cause acute and chronic illnesses through inhalation of vapours. Spills should be disposed of properly so that harmful exposures that cause illness do not occur," he stressed.

Both Yu and Cabral agreed that there were lapses on the part of school officials, adding that there would be an investigation of the incident.

In a letter to Cabral signed by the school's parents and teachers, Nacion was criticised for keeping the leak a secret and belatedly ordering the suspension of classes.

They said Nacion placed the students and teachers at risk, adding: "We greatly fear the adverse consequences said mercury exposure has already caused to them."

According to the World Health Organisation, the inhalation of mercury vapour can have harmful and even fatal effects on the nervous, digestive and immune systems, lungs and kidneys.