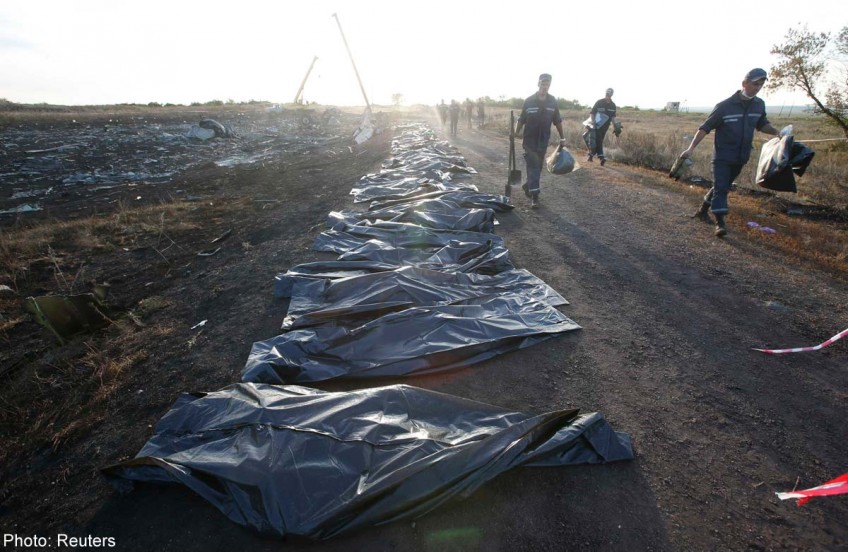 Members of the Ukrainian Emergencies Ministry gather and place bodies at the crash site of Malaysia Airlines Flight MH17.

BANGKOK - An act of savagery, worsened by continuing acts of inhumanity. The shooting down of Malaysia Airlines Flight 17 and the looting and callous handling of the crash site in a rebel-held area in Ukraine are unspeakable crimes; they must be condemned in the strongest possible manner.

The pro-Russian separatist rebels in Ukraine who in all likelihood launched the surface-to-air missile that destroyed MH17 last Thursday cannot use the fog of war as an excuse.

If they did not have the ability to distinguish commercial aircraft from military, or indeed had no capacity whatsoever to properly identify an aircraft flying above 32,000 feet, then launching the missile was brute, unthinking, who-cares-who-gets-hurt aggression. Firing blind cannot be justified.

That the separatists "control" the crash site-withholding access to investigators and emergency workers when they see fit, allowing the looting of the victims' personal effects, spiriting some 40 bodies (all told, there were 298 passengers and crew) out of the site and into undisclosed locations, for unknown reasons-compounds the tragedy. There is no justification for reckless cruelty or callousness either.

Malaysian Transportation Minister Liow Tiong Lai, representing a beleaguered government that has not yet recovered from the mysterious disappearance of MH370 last March, defined the urgent problem in neutral but still stark terms: "Days after the plane went down, the remains of 298 people lie uncovered. Citizens of 11 nations, none of whom are involved in the conflict in eastern Ukraine, cannot be laid to rest."

In a telephone conversation with German Chancellor Angela Merkel on Saturday, Russian President Vladimir Putin gave his assurance that Russia was committed to a "thorough and objective investigation of all the circumstances of the incident." But Russia, the only possible source of the Ukrainian separatists' surface-to-air missiles, remains committed to the illusion that it does not know what happened.

While the separatists can try to remove evidence from the crash site (they first said they had retrieved the flight data recorders, the so-called black boxes, before announcing that, no, in fact they hadn't), it is much harder to remove evidence gathered from other sources.

Some time before the downing of MH17, the separatist rebels made it known that they had gained the capability to fire surface-to-air missiles. Three days before the doomed MH17 flew over Ukraine, a Ukrainian military transport plane was shot down by one such missile-an SA-11 (Buk). The rebels claimed they had shot down the Ukrainian airplane without help from anyone-probably in an attempt to avoid any suggestion that Russian help or guidance was involved.

A few hours after MH17 was shot down, Russian state media (officially sympathetic to the separatists) reported that the rebels had downed another Ukrainian cargo plane.

These reports may have been based on rebels' boasts, posted on their websites, about shooting down another Ukrainian transport plane at about the time MH17 went down. These posts have since been deleted. Three missile launchers have also been tracked being driven back to Russia, several hours after the crash.

For many following the news closely, greatly disturbed that a largely obscure conflict had claimed even more innocent lives, the most convincing proof that Ukrainian separatists had shot down MH17 came when a rebel leader, Igor Girkin, suggested that the passengers and crew were already dead even before the plane hit the ground.

The Star of Malaysia was one of many news organisations to report the separatist's bizarre conspiracy theory, based on what he said people at the crash site had told him: "a significant number of the bodies weren't fresh."

Only someone responsible looking for an out, for any explanation, would even think of such an absurd, outrageous possibility.