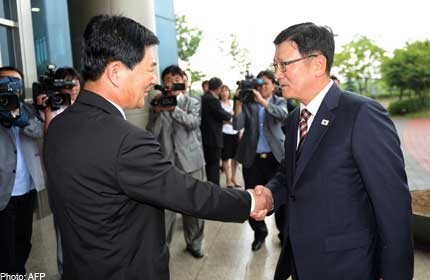 SEOUL - North and South Korea will hold a seventh round of talks Wednesday on reopening their joint industrial park in Kaesong, with a lot more than the future of the complex riding on the outcome.

With South Korea kicking off a military exercise with the United States next week, the result of the negotiations could determine whether the peninsula is sucked into another dangerous cycle of escalating tensions.

Similar joint exercises earlier this year were cited by Pyongyang as the main factor behind its decision in early April to effectively shut down the Kaesong industrial zone.

The North initially barred access to the park, which lies 10 kilometers (six miles) inside the North Korean border, and then withdrew its 53,000-strong workforce that keeps the 123 South Korean firms in Kaesong running. After six rounds of talks on normalising operations resulted in little more than mutual mud-slinging, the process petered out and Kaesong's future looked bleak.

The proposal came with what North Korea termed "magnanimous" assurances of Pyongyang's commitment to Kaesong, but stopped short of the South's demand for a binding guarantee that the North would not close the complex again in future.

The North sees offering such a safeguard as an admission of sole responsibility, but the South's Unification Ministry insists it will continue to push for the concession on Wednesday.

"South Korea will focus on securing a guarantee that could help normalise the industrial complex," ministry spokesman Kim Hyung-Suk said.

Looming large over the talks is the launch next Monday of the annual "Ulchi Freedom Guardian" joint military exercise, involving about 50,000 South Korean and 30,000 US troops practising a North Korean invasion scenario.

Although the drill is largely computer-simulated, it is viewed as highly provocative by North Korea, which has already issued dire warning of its impact on stability on the peninsula.

"If the drill takes place, conditions in the region will become unpredictable and escalate to the brink of war," the North's ruling-party newspaper Rodong Sinmun said last month.

The Korean peninsula was gripped by several months of sustained military tensions following the North's third nuclear test in February, with Pyongyang threatening pre-emptive nuclear strikes against the South and the United States.

Some analysts believe next week's exercises are likely to trigger a fresh cycle of threats and provocation from North Korea and its young leader Kim Jong-Un.

"The North Korean system's seemingly inherent need for instability - and the frustrations of its current situation - provide every reason to be on guard against new provocative actions," said Scott Snyder, senior fellow for Korean Studies at the US-based Council on Foreign Relations.

"The bottom line: expect more nuclear and missile tests and/or other provocations sooner or later, because Kim Jong-Un's legitimacy and his prospects for survival may depend upon it," Snyder wrote.

Whether it is "sooner or later" could depend in large part on how Wednesday's Kaesong talks conclude.

A rancorous outcome similar to the end of the sixth round would set the stage for a particularly vitriolic North Korean reaction to the start of the joint exercises.

"If the talks fall apart again, the North will start spewing its bile over the exercises," said Paik Hak-Soon, an analyst at the Sejong Institute think-tank in Seoul.

But if progress is made towards re-opening Kaesong then Pyongyang may choose to tone down its criticism so as to avoid endangering a resumption of operations.

Established in 2004, Kaesong was a key hard-currency earner for the North and the decision to shut it down took many observers by surprise. As the last remaining symbol of inter-Korean operation, the project had managed to ride out previous North-South crises without serious disruption.

Paik said the North's proposal for fresh talks seemed to have a genuinely forward-looking tone that the South Korean side should "react positively to" and without being too inflexible over its demands for a guarantee.

South Korean President Park Geun-Hye will face "considerable pressure" at home and abroad if she is seen to push the North too far into a corner over Kaesong, Paik warned.