Missed flight but thankful to pass New Year together 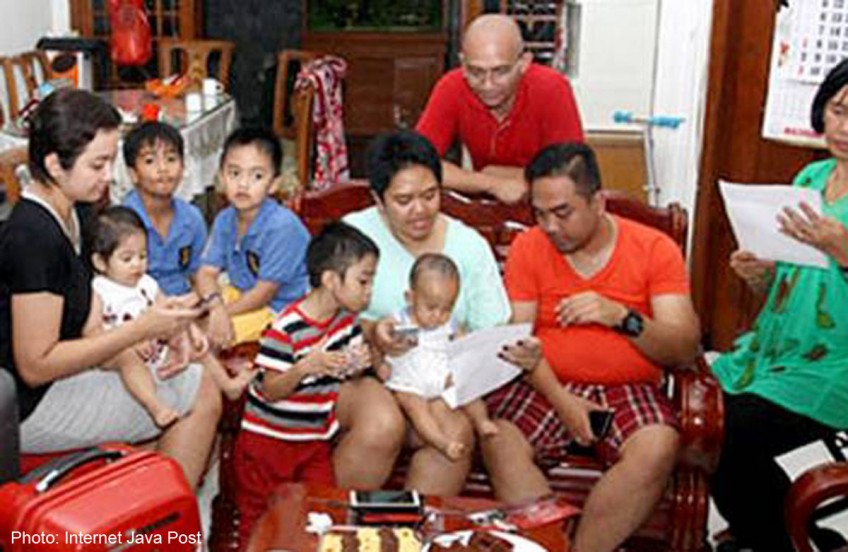 Former beauty queen Anggi Mahesti (left) and her family missed the flight after ignoring an email about its earlier departure.

"The children were feeling bored at home," she told The New Paper over Facebook.

It was perhaps a "problem" she was grateful to have.

Ms Mahesti, a Miss Indonesia runner-up in 2008, and nine of her family members had missed getting on AirAsia flight QZ8501 on Sunday.

Ms Mahesti and her group missed the plane because they were not aware of a change in the departure time.

Her husband Ari Putro Cahyono, who runs a motorcycle dealership, had failed to open an e-mail sent by AirAsia on Dec 15 informing him of the change. He had also missed a telephone call from the airline earlier in the month.

Amazingly, her husband's brother-in-law, whose family was travelling with them, had also missed the same e-mail and phone call.

By the time the group of 10 reached the airport, the final call had already been made, Ms Mahesti said.

The group of five adults and five children, including two babies born last year, had planned to go to Singapore to celebrate the New Year and it would have been their first holiday together.

They had planned to take the five children to Universal Studios Singapore and Snow City theme parks in Singapore.

Instead, they went to Ciputra Waterpark, the biggest water attraction park in Indonesia, inspired by the tale of Sinbad's adventures.

When asked if the children had been disappointed, she said: "They are too young to understand. All they knew was the plane flew away without us and then it fell down."

It was also a quiet New Year's Eve for accountant Inge Goreti Ferdiningsih, 37, who had her loved ones close to her, including her ailing father.

They, too, would have boarded that fateful AirAsia flight if not for her father falling ill.

On the day before the flight, they had to call off the trip that had been planned as far back as June, to the chagrin of her elder son Christopher, 10.

After finding out what happened, Madam Ferdiningsih wrote on her Facebook wall: "God is amazing, He keeps me and my family from distress."

When asked about her father, she would only say: "He is all better."

This article was first published on January 02, 2015.
Get The New Paper for more stories.