Dangerous chemicals missing from the laboratories of Hong Kong's universities amid campus clashes between police and anti-government protesters could pose a threat to public safety, officials and experts have warned.

Police on Monday even described university grounds as "powder kegs" with unthinkable risks as the chemicals - thought to be stolen by radicals - were toxic and corrosive.

Campuses citywide have become war zones in the past week as clashes between students and officers intensified. So far, three institutions - Chinese University (CUHK), Polytechnic University (PolyU) and City University (CityU) - have reported to police that chemicals were stolen from their laboratories.

Among these, the most poisonous would be zinc cyanide and sodium arsenite, according to Kenneth Kwong Si-san, a former lecturer from CUHK, who is now a star tutor at the Modern Education tutoring centre. Kwong said the two compounds were basically a variation of cyanide and arsenite, often stored in small amounts in laboratories and used as catalysts in chemical reactions.

While physical contact with the two substances, which exist in powder form, may not pose any major risk, they can be deadly if they enter a person's eye or mouth.

Clinical toxicologist Jeffrey Fung Hin-tat said swallowing as little as tens of milligrams of cyanide could lead to death. The patient would find it difficult to breathe as the toxins destroyed the ability of cells to generate energy, according to the expert. "One could die in minutes," he said of serious cases.

An intake of a little more than 230mg of arsenite could also prove fatal, Fung said, although it would take longer for the substance to take effect, with symptoms such as irregular heart rate and severe diarrhoea.

A source told the Post that around 20 types of chemicals were reported missing from PolyU, including: 2.5 litres of concentrated sulphuric acid; 1kg (2.2lbs) of sodium metal; a small amount of zinc cyanide; sodium arsenite; hydrochloric acid; and DDT.

Toxicologist Dr Lau Fei-lung said these type of toxins could be used to commit "homicide" if in the wrong hands. "It is far more dangerous than petrol bombs and arrows," he said.

A law enforcement expert, who is specially trained to handle and dispose of dangerous materials, said that the concentrated acid could be used as corrosive bombs. He warned that sodium arsenite, a highly carcinogenic white powder, is the most fatal, as a tiny amount on skin was enough to cause acute health effects and death.

Lau said the powder could be absorbed through the skin, which could cause poisoning if in a long run. "It could cause difficulties in breathing or irritation. A sufficient amount could kill," he said, expressing concern for officers on the front line.

"All these chemicals are corrosive, flammable and toxic. The riot control and protective gear of officers do not guard against such chemicals."

He also added that sodium metal was highly dangerous as it could cause an explosion if it reacted with water. 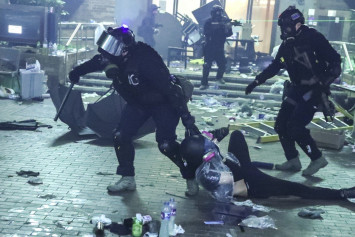 Acting deputy chief fire officer Leung Wai-lok warned at a news conference that misuse of these dangerous chemicals would be hazardous to society. "People who are exposed to such chemicals should remove their clothes and wash with plenty of water."

The new chief of the Police Public Relations Branch, Kenneth Kwok Ka-chuen, made his first appearance on Monday and said police were investigating the loss of the chemicals, blaming mobs for the theft.

"Among the stolen chemicals were highly volatile explosives. We must warn that the university campus has become a powder keg where danger is far beyond what we can estimate," Kwok said.

A spokesman for CUHK said it made a police report on Sunday afternoon after the school discovered flammable materials at various locations on its campus.