The credibility of Hong Kong's police force has been called into question over the official explanation that Special Tactical Squad officers accused of brutality during recent clashes with anti-extradition bill protesters did not have their identifying numbers displayed on their uniforms because there was "no room" to fit them.

At the same time, hundreds of frontline officers and their families have complained of bullying and a public hate campaign against them, including the posting of their personal information online, by critics accusing them of abusing their power.

On Wednesday, Secretary for Security John Lee Ka-chiu said there was no space on the uniforms of Special Tactical Squad (STS) officers to display their numbers, sparking anger and online mockery.

Many people took to social media to complain, with some saying that even beauty pageant contestants displayed numbers on their swimsuits.

Photos from the Post and other media outlets showed STS officers always displayed their numbers on their uniforms during the 2014 Occupy Central movement, the 2016 Mong Kok riot and as recently as June 9, during clashes outside the legislature.

But since June 12, most squad members did not have their numbers on display.

A source said the numbers were not on show because of a new uniform design. The old design allowed officers to clip their numbers on their shoulders while the new one did not, he said. 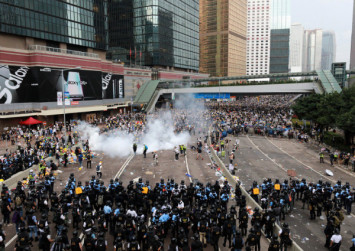 Icarus Wong Ho-yin, convenor of the NGO Civil Rights Observer, said: "The police did it deliberately. If citizens want to complain about officers abusing their power, how can they do it if they don't know their numbers? [Lee] was insulting Hongkongers' intelligence by saying there was no space on the uniforms."

To repair the force's image, Wong said an independent committee should be set up to look at how police handled the protests.

In response, a police spokesman repeated Lee's remarks that the force would review the matter and follow up. He said the squad's uniforms were designed according to operational and strategic needs.

He said there was no space to show the numbers but officers would do their best to display them.

Meanwhile, the spokesman said the force had found that the personal information of more than 400 officers, and about 100 of their family members, was posted online. Police would follow up and offer help to those affected, he said.

The Office of the Privacy Commissioner for Personal Data said that, as of 5pm on Thursday, it had received 52 complaints and 16 inquiries in relation to those who posted officers' personal information online.

A senior police officer, who asked not to be named, said: "Internet users' treatment of us is very unfair. Not only do they insult us, they do it to our families as well. We had a mission, and that mission was to protect the Legislative Council." He hoped that in time the force's image could be slowly restored now the government had suspended the controversial bill, which, if passed, would allow the transfer of suspects to jurisdictions with which Hong Kong had no extradition agreement, including mainland China.

Council Front lawmaker Eddie Chu Hoi-dick warned he would launch a judicial review over the missing identification numbers if he did not get answers from Commissioner of Police Stephen Lo Wai-chung.

"The most important thing is not to win the lawsuit, but to give the public more protection," Chu said.

In a letter to Lo, Chu asked the police chief to verify Lee's claims that there was not enough space on uniforms and why numbers were on display on June 9 but not June 12.

If he did not get answers before 4.30pm on Friday, Chu said he would launch the legal process "without further notice".

Separately, the Civil Human Rights Front, organiser of the two massive protests this month, filed a formal complaint against the police chief over officers' inappropriate use of force.

The complaint was lodged with the force as new images and videos were circulated online this week, showing police firing tear gas into a peaceful assembly outside Legco last Wednesday, even though violent clashes between protesters and officers were taking place elsewhere.

"Without any warning or advance notification, police fired a good number of tear gas rounds at people attending a lawful assembly, including three to four that were shot on the main stage," front convenor Jimmy Sham Tsz-kit said.

Sham said tear gas was also fired at thousands of people standing between the legislature and Citic Tower. Sham said the crowd panicked and had to seek shelter inside Citic Tower through one small door. That could have resulted in a stampede, he added.