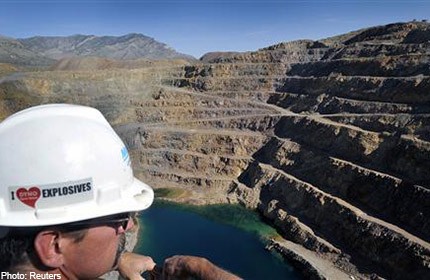 ULAN BATOR - A silver swastika hanging around his neck, Boldbaatar Gombodorj points out his targets on a map of Mongolia like a World War II commander: little flags representing foreign mining firms that he and fellow "eco-Nazis" accuse of destroying their country.

Herders have roamed Mongolia's steppe for centuries, while the country only threw off the Soviet yoke after decades of domination, creating fertile ground for a mix of communal land rights and nationalism that can turn into unashamed racism.

"Those who pollute the rivers and springs taint their purity, and they should be punished by death," he adds, citing the revered Mongol warrior Genghis Khan, whose portrait adorns the walls.

He says the swastika is an ancient Mongol symbol and that his group, Fight for the Security of Mongolia, does not support fascism. But other campaigners openly identify themselves as neo-Nazis and reference the Third Reich.

When Gombodorj joined the army he knelt on the ground, held a Mongolian flag to his forehead and "swore to defend every inch of our land. And now it is being sold into the hands of foreigners", he says.

He is ready to embrace violence for his cause, he adds. A few weeks ago his group ended up in a tense standoff with armed guards at a South Korean-owned mine.

"We would have fired if they had," says Gombodorj.

Mining makes up a fifth of Mongolia's economy and it has enjoyed one of the world's highest growth rates since the authorities invited in foreign companies to extract its gold, copper, coal and iron ore.

One of the biggest and most high-profile projects, Anglo-Australian giant Rio Tinto's Oyu Tolgoi mine, is expected to produce an average of 430,000 tonnes of copper and 425,000 ounces of gold annually for 20 years, and generate up to one-third of the government's revenue.

But it has been embroiled in a series of disputes and Mongolia's foreign investment laws have since undergone a series of changes.

"The foreigners dictate what the relationships should be within Mongolian society and they dictate what laws should or should not be implemented," says Mongolia's best-known eco-warrior, Tsetsegee Munkhbayar, who heads the group Fire Nation.

In Tsagaan Khass, or "White Swastika", the most radical group of all, members greet their leader Ariunbold Altankhuum with a Nazi salute while clicking their heels.

They dress in black, while some sport swastika tattoos and others wear rings adorned with the Germanic Iron Cross.

In their office, tucked in the basement of a Soviet-era building in central Ulan Bator and overseen by a bust of Genghis Khan, Altankhuum told AFP the group was filling the role of local authorities who have failed to stand up to foreign firms.

Tsagaan Khass show up at sites unannounced to inspect licences, check on Mongolian workers' wages and ensure that the revenues benefit locals, he says, and if dissatisfied with what they find, they sometimes sabotage operations, confiscating keys or puncturing vehicles' tyres.

But, wearing a Gestapo-style black leather greatcoat, he insists: "We are not a gang of gangsters."

The mining firms "violate the rights of Mongolian citizens", he says. "They dig a hole and then leave behind terrible environmental damage."

The influence of such groups is difficult to gauge, with Tsagaan Khass claiming to have more than 3,000 supporters, and Gombodorj declining to say how many people belong to Fight for the Security of Mongolia.

Their hard-core approach has not gone mainstream, but Mongolians may become increasingly polarised if mining inequality persists, says Jargalsaikhan Damdadarjaa, a prominent economist, commentator and broadcaster.

"It is a matter of balancing environmental conditions and mining interests, and it is not always done properly. Rules and regulations are not enforced as good as the people want," he says.

"That brings this controversy amongst the population."

Munkhbayar, of Fire Nation, won the US-based Goldman Environmental Prize in 2007 for his work in shutting mines near the Ongi river, one of the country's largest.

But he has also spent time in jail and his group has resorted to force - firing at equipment at a mine in the southern province of Ovorkhangai, and shooting arrows at a government building when leaders refused to meet them.

"These are necessary methods when other means have proved unsuccessful," Munkhbayar insists. "Over the past 20 years, more than 4,000 water sources have been identified as drying up and 1,300 have disappeared.

"The main reason is mining activity," he says. "When we go into the countryside, we are welcomed like saviours."