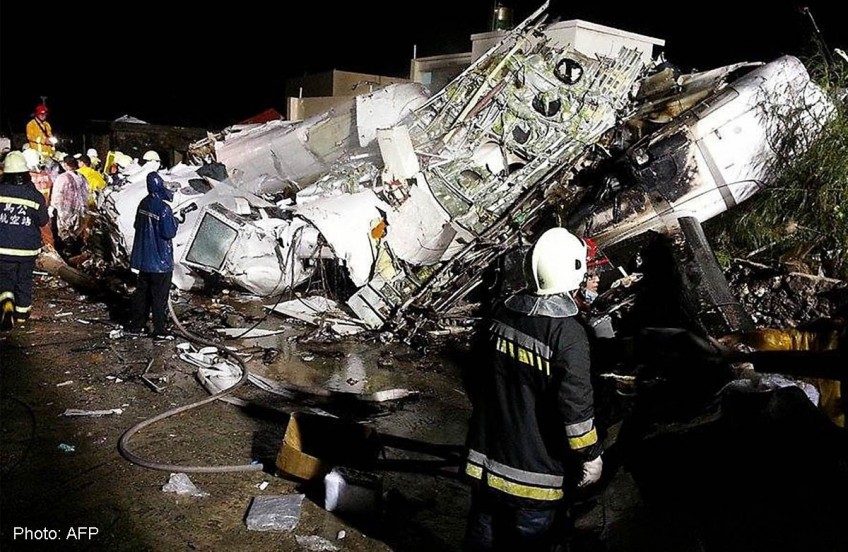 The flight, GE222, took off from Kaohsiung Siaogang Airport around 5pm. It was scheduled to land in Penghu’s Magong Airport at 5.30pm.

Taiwan - More than 40 people were killed in a plane crash in Taiwan on Wednesday, officials said, with local television reporting the flight had smashed into two houses after an aborted landing.

Authorities said Taiwanese airline TransAsia Airways flight GE222, with 58 on board, crashed near Magong airport on the outlying Penghu island after having requested a second attempt to land.

Television images showed firefighters working at site of the mangled wreckage and soldiers on the scene.

There were conflicting reports of the death toll from officials and local media.

The island's local fire chief put the death toll at 45 while media reports said 47 were killed.

"The control tower lost contact with the aircraft soon after they requested a go-around (second attempt to land)," Chen told reporters.

It was flying from Kaohsiung and had been delayed due to bad weather, according to Shen.

As many as 51 passengers of a TransAsia Airways flight died as it made an emergency landing in Penghu on Wednesday evening, Taiwan officials reported.

There were conflicting figures of the death toll from the news reports, but Taiwan's Transportation Minister Yeh Kuang-shih said as many as 47 passengers might have died while 11 people survived, said Taiwan News

Flight GE222 was carrying 54 passengers and four crew members on a flight from Kaohsiung to Makung in the midst of Typhoon Matmo.

Reports said the aircraft was scheduled to leave Kaohsiung at 4pm. but was delayed till 5.43pm because of the bad weather. The pilot was reportedly asked to wait until 7.06pm before being allowed to land in Penghu.

Apparently, his first attempt at landing failed, and he requested to make a second landing. But the control tower reportedly lost contact with the plane, reported Taiwan News.

The plane was reported to have had a 'hard' landing, crashing into the township of Huhsi, setting off a fire which burnt two houses.

The pilot was identified by Taiwan media as Lee Yi-liang, 60, and his co-pilot as Chiang Kuan-Hsing, 39.

Makung Airport was shut down after the incident.

[[nid:126048]]
SUBSCRIBE TO OUR NEWSLETTER
Your daily good stuff - AsiaOne stories delivered straight to your inbox