More than 40,000 people gathered again at Hong Kong's political centre for a second day of strikes, according to organisers, with tensions rising on Tuesday evening between protesters and police near the government headquarters.

At Tamar Park in Admiralty, crowds started packing the lawn in the afternoon for the movement, organised by representatives from various sectors and supported by the Confederation of Trade Unions.

Easy Kwok, one of the organisers, said more than 40,000 people showed up - a turnout that was similar to that of the previous day. He could not give a figure on how many others citywide had boycotted work. Police put the attendance at 4,080 at its peak.

Attendees, comprising a mix of office and blue-collar workers, as well as secondary school students, were calling for the full withdrawal of the now-shelved extradition bill and an independent inquiry into police handling of protests.

Kwan Chun-pong, 48, who works in the manufacturing industry, said he took time off work on both days to attend the rally.

"I worry about Hong Kong more than my job," he said, adding that young people on the front lines of demonstrations faced more challenges, such as being arrested or coming under excessive force from police.

"We are just sitting on the lawn, our efforts are relatively minimal," Kwan said.

"Under this situation, we have no way to back down. We can only try our best," she said.

Eliza Wong, 20, who works in the food and beverage sector, came to support the movement before her late shift. When asked about potential pressure from employers for attending the protest, she said: "If I'm sacked just for this, which does not affect my company's operations, then I won't want to be with such an employer anyway."

Form Six students Vicky Lam, 16, and Winnie Cao, 18, came to the rally to show their support after classes. Lam said she believed with a high turnout for the rally, more people would eventually care about the movement even if the government did not listen to protesters' demands.

With the university entrance exams months away, Lam said: "We enter university for a good career in Hong Kong. But if Hong Kong changes, then this does not work anyway."

The two-day strike was the second such widespread industrial action since the political crisis erupted in June.

A brief stand-off on Lung Wo Road between protesters and police occurred on Monday evening, near the rally venue, before unrest then crept up in other parts of the city - such as Mong Kok - into the night.

Similar tensions developed near the rally again on Tuesday when around 6.30pm, protesters pointed laser beams at officers behind water barricades set up outside the Chief Executive's Office. Police warned the crowd to leave or face possible use of force. 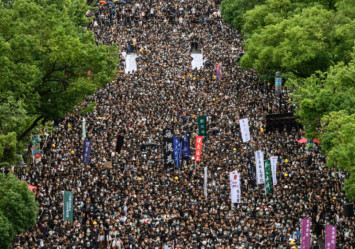 A verbal dispute then broke out between demonstrators in black and a Mandarin-speaking passer-by.

The man had shouted for help metres away from protesters, claiming he was attacked by some people in black. Officers rushed to help him after he claimed he was hurt, and they escorted him to their side.

After the stand-off in Admiralty, protesters emerged again in Prince Edward and Wong Tai Sin. Dozens of black-clad protesters entered Temple Mall in Wong Tai Sin after learning police were around the exits at the MTR station.

In the previous strike movement in August amid weeks of protest chaos in Hong Kong, an estimated 350,000 people citywide boycotted work, with 290,000 attending seven rallies around Hong Kong.

The extradition bill would have allowed the transfer of defendants to jurisdictions with which the city has no such agreement, including mainland China.