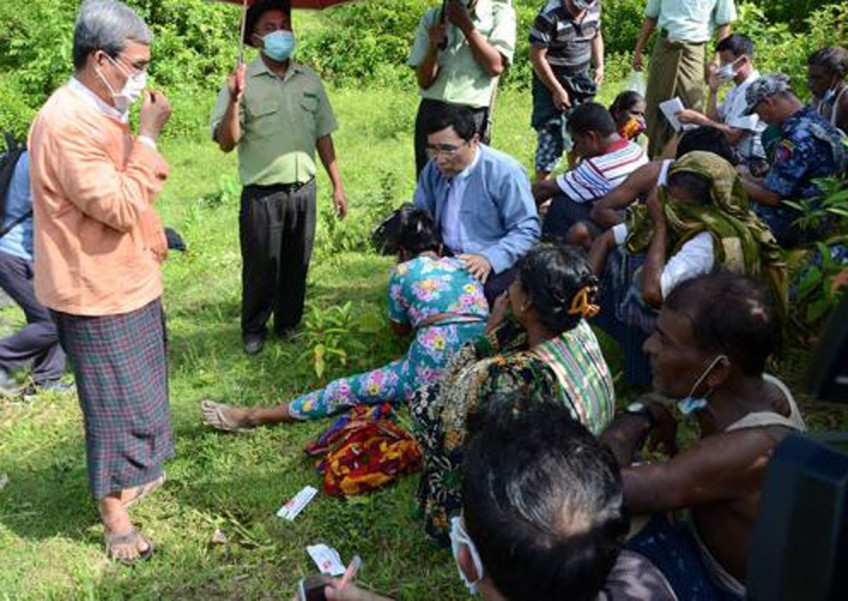 "Two more smelly holes were found. For the time being, I'm not sure how many bodies were there as the search is still ongoing," said Thura San Lwin.

The bodies found yesterday and today were all tied up together and the bodies of women found on September 24 showed signs of rape but authorities made no confirmation about it.

Ni Mal, who took part in digging up the bodies, said "Today another hole was found about 1000 feet away from the hole found yesterday. It's found at about 1pm. A total of 17 male bodies were found. All bodies were dug up at about 4pm. All of them were tied up and with stab wounds all over their bodies. They're all from Khamaungseiktaung Village,"

Ni Mal, a Hindu, says it's an act of ethnic cleansing of Hindus who were born in Myanmar and live peacefully and it's a very brutal mass killing.

Arriving at about 1,000 metres from the west of the village, the terrorists killed the men and women, and took eight other women to Bangladesh after forcibly converting them to Islam. Currently, they are staying at the house of a Hindu at Kutupalaung refugee camp in Bangladesh.

To investigate the case, combined teams together with Ni Mal and Shwe Ni, three people from Khamaungseik Village and four from Tamantha Village went to Yebawkya Village at 7 am on September 24.

After a search by different teams, a foul smell came from the spot about 1,200 metres northwest from Yebawkya Village and digging led to the discovery of two holes measuring 13 feet by 13 feet, both of which are 10 feet distant apart.