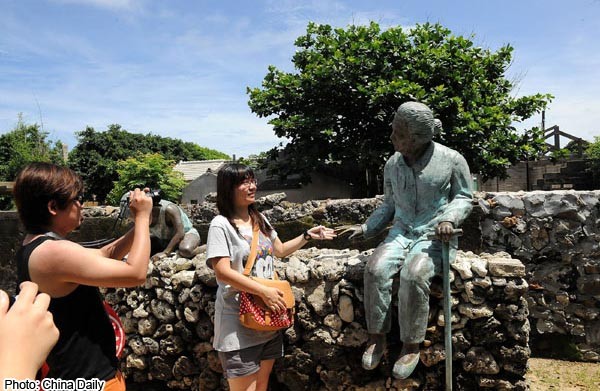 Tourists from the mainland visit Penghu islands in Taiwan province.

Shu Rongjuan, 63, a resident of Longyan city, Fujian province, is thrilled with the news that many more Chinese from the mainland will soon be able to travel to Taiwan by themselves instead of in groups as has been the case for decades.

Her relatives live in Taiwan and she can't wait to visit them. The many challenges of trying to find a tourist group bothered her earlier.

The Beijing-based Association for Tourism Exchange across the Taiwan Straits announced on March 18 that individual travelers from 11 cities on the mainland can visit Taiwan from April 15.

With this, the total number of mainland cities where Taiwan travel restrictions have been lifted hit 47. The first relaxation was made in June 2011.

"We settled on the fifth group of cities to broaden the travel channels to Taiwan," says Liu Kezhi, secretary-general of the association.

Yang Ruizong, director of the Taiwan Strait Tourism Association's Beijing office, says four of the new cities are provincial capitals, while the remainder have mature local tourism markets and are well connected by air.

Compared with group travelers, an individual traveler will find it easy to explore streets and alleyways, chat with local people and get deeper insights into the place, he says.

He adds that the current daily quota of 4,000 for individual mainland travelers to Taiwan might even increase in the future depending on how the local tourism market develops.

Mainland tourists were the major force, accounting for 40.2 per cent of all visitors, according to statistics from the tourism exchange association.

More than 2.18 million mainland individual travelers made trips to Taiwan from June 2011 to February, including 1.18 million last year, up 125.8 per cent.

Individual travelers accounted for 37 per cent of all mainland residents who visited Taiwan in 2014.

Zhang Youyin, a researcher with the Beijing-based think-tank Regional Tourism Planning and Development Institute, says that the move will give greater incentive to boost travels to Taiwan.

Mainland tourists to Taiwan are mostly individual travelers, who otherwise have to turn to travel agencies to sign up for group travels, Zhang says.

"The move will help those qualified mainland residents cut costs and save time with travel agencies and make flexible individual travel plans," he says.

They will also be spared of the uncertainties associated with group trips－such as a sudden change of itinerary because of someone's medical condition or other issues, he adds.

The Association for Tourism Exchange across the Taiwan Straits has approved 48 more outbound tourism organisations, bringing the total number of qualified travel agencies handling Taiwan tours to 311 on the mainland.

Visitors now can spend roughly 200 yuan ($32.30) to have Ctrip deliver the permits to them, after submitting the necessary documents, such as an endorsed Taiwan pass. The process usually takes 24 days.

The Beijing-based Baicheng International Travel Co is a beneficiary of the new policy.

"We believe that Taiwan will see continuous growth in the number of individual travelers in the future because of its abundant tourism resources and relatively short distance from the mainland," says the company's COO Duan Dongdong.

Duan is looking forward to a strong boost in business.

"We will take the opportunity and use the Internet to help our customers, especially young travelers, book hotels and buy tickets for tourist attractions in Taiwan."