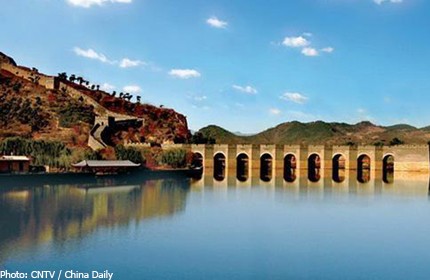 BEIJING - Travellers the world over know what the Great Wall of China looks like, and one section of the famous landmark is increasingly drawing visitors.

The Jiumenkou section of the wall, in north-eastern China's Liaoning province, is built over a body of water and used to be a defensive front line against nomadic tribes.

Built more than 1,500 years ago, it has undergone multiple renovations and is a prime example of a defensive fortification.

A representative of the tourism body for the Jiumenkou Great Wall said interest in the wall is so great that "we have a team of tour guides fluent in English to provide in-depth introductions to visitors from around the world".

But that is not all there is to see in Liaoning.

Another site in the area that's drawing attention is the Three Mausoleums of Shengjing. The site includes the tomb of the founding emperor of the Qing Dynasty and tombs dedicated to his ancestors.

To protect the site, the number of tourists visiting each day is monitored, tourism officials said.

The Qing dynasty was established by the nomadic Manchu people living in northern China, and the legacies here are testimony to the historic clash and merging of Manchu culture with the Han civilisation.