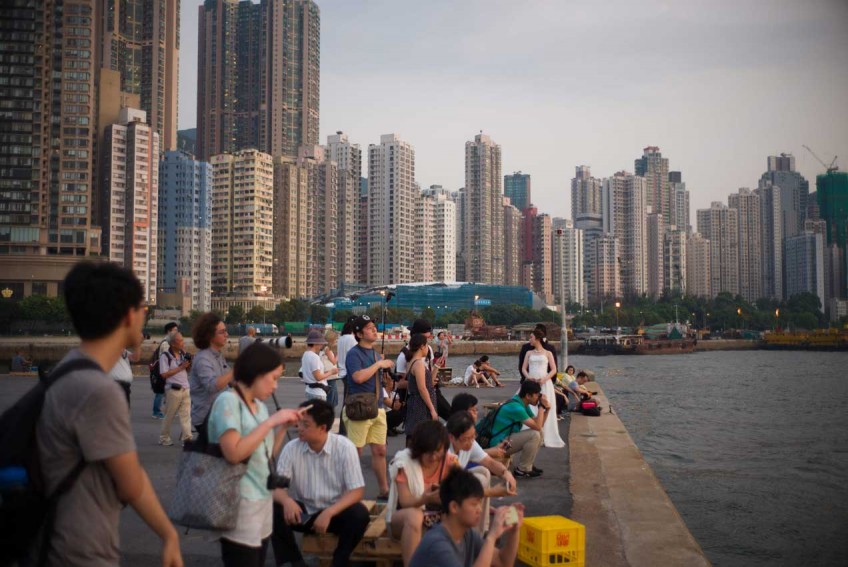 A few months ago, a 36-year-old European national gave birth to a boy in Hong Kong. All went smoothly but she and her husband faced one quandary.

Given that the woman is of partial Chinese ethnicity - her mother is a Chinese Malaysian - her son would have been entitled to a Hong Kong passport. China's nationality law allows those of Chinese descent who are born on Chinese soil to get one.

But she and her husband decided not to take up the option, even though Hong Kong allows for multiple citizenship.

China, she fears, could "lay claim" to her son, such as if "he is in a sticky situation in China and is treated as Chinese rather than European".

The recent saga of the five Hong Kong booksellers, whomany believe were abducted by mainland agents for trading in gossipy books about Beijing leaders, cemented her decision.

One of the booksellers, Mr Lee Bo, holds both Hong Kong and British passports. When Britain sought access to him, China's Foreign Minister Wang Yi's retort was: He is "first and foremost a Chinese citizen".

To the European woman, who has lived in Hong Kong for eight years, the situation is "just too precarious for me to want my child to be a Chinese citizen", she told The Straits Times.

A sense of disquiet about Hong Kong's future is giving both locals and parts of the overseas community here pause for thought, as they ponder what lies ahead for themselves and their families.

Questions are being raised about whether the "one country, two systems" framework that allows the special administrative region to operate autonomously from the mainland is being eroded. Signs indicate increasing interference by Beijing: Mr Lee, the bookseller, was reportedly nabbed by mainland agents within Hong Kong in what would then be a breach of the formula. His colleague Lam Wing Kee said he was denied access to lawyers and family during his eight-month detention on the mainland.

Partly driven by such fears, an increasing number of Hong Kongers are giving up their Hong Kong passports, reported local media.

In the first quarter of this year, 56 people renounced it, compared to 33 per quarter in the past five years.

Immigration agencies also say an unprecedented number of Hong Kongers are contemplating emigrating, since the 1997 handover from British rule. This is in line with a recent survey that shows that nearly half would leave if they could, many also citing quality of life issues such as unaffordable housing .

Ms Mary Chan of Rothe International Canada says a key turning point was the 2014 Occupy movement, when protesters tried - and failed - to agitate for more freedom to elect their leader.

The number of enquiries she received doubled from a daily average of one or two. Other agencies, Paul Bernadou & Co and Luxe Legal Group, report similar trends.

The actual numbers remain low though, compared to the exodus after the bloody crackdown on Tiananmen Square protests in 1989, leading up to 1997.

Statistics from the Security Bureau show that in 1995, 43,100 Hong Kongers emigrated. Last year, just 7,000 did so - a small increase from 6,900 the previous year. The top three destinations are the United States, Australia and Canada.

Mr Paul Bernadou, the founder of the migration consultancy, explains that the most recent figures reflect a lag as families take time to finalise their decisions and wait for the applications to be processed.

A 40-year-old man, who wants to be known only as Mr Cheung, is among those applying to emigrate. He began the process last June and expects to move his family to Canada next year.

While firmly part of the city's middle class - he and his wife, both public servants, have a joint monthly income of HK$160,000 (S$27,800) - he believes that prospects for their children, aged six and three, are dim.

He reels off a litany of concerns: education, property prices, food safety, overcrowding. He also fears Hong Kong's freedoms are being stifled, citing the booksellers episode.

"The freedoms of the Hong Kong people are diminishing," he asserts. "When people speak up, Beijing thinks its authority is being challenged. And it will take steps to make you shut up."

He adds: "Before, we loved Hong Kong. Now we are just disappointed about what it's become."

Such perceptions are also creating jitters among foreigners here who hold the dark-blue Hong Kong passport with the People's Republic of China emblem, as well as their original passports.

While China does not allow for dual nationality, Hong Kong does. And the Hong Kong passport remains a highly desirable one, ranking 20th, with visa-free access to 154 countries. It also grants easy access to mainland China, a burgeoning economy .

But the booksellers episode has raised an issue that is rarely discussed: To what extent are dual nationals accorded the diplomatic protection of their second passport when in China, including Hong Kong?

It varies according to the country, says law professor and associate dean (research) Simon Young, of the University of Hong Kong.

The Hong Kong immigration website says that Chinese nationals holding a second passport will not be entitled to consular protection from that country.

But for some countries, it depends on which travel document one uses. Canada had inked an agreement with China indicating that as long as a dual national enters using his Canadian passport, he will be considered a Canadian, assured of all the consular access and protection of Canada.

The United States does not put it as starkly, but writes: "When a US citizen is in the other country of their dual nationality, that country has a predominant claim on the person."

In Singapore, dual nationality is not allowed. But a child of Singaporean parents who is born overseas - in places such as Hong Kong or the US that grant nationality to eligible babies born on their soil - may gain a foreign passport by birth. He or she has to renounce it by age 18 or face the possibility of being stripped of the Singapore citizenship. Singapore has not stated its consular policy for such dual nationals.

At any rate, such details may not be the deciding matter when China decides to take action, notes some observers.

Another bookseller, Mr Gui Minhai, was taken away in Thailand, not China. He is Swedish, having renounced his Chinese citizenship. But he remains detained in mainland China and Sweden's request to meet him so far has been rejected.