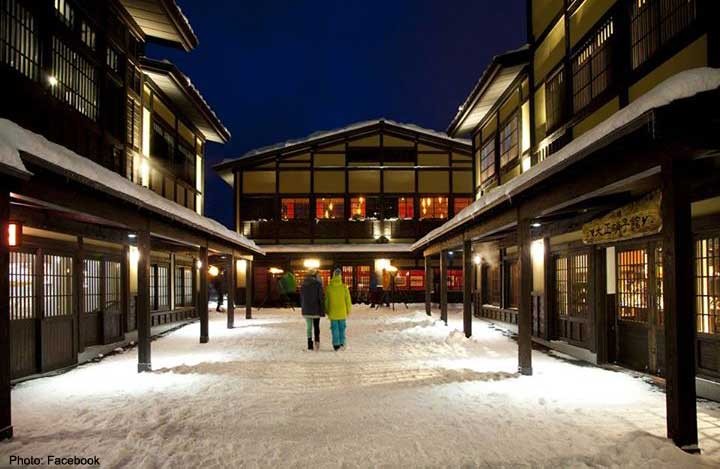 Judging from the numerous Facebook and Instagram posts of winter holidays in Niseko over the last few months, it's clear that Singaporeans can't get enough of the Hokkaido holiday spot.

No wonder, considering Niseko gets a massive 18 metres of snowfall on average during its winter months from December to May, and the snow is regarded as some of the softest and lightest in the world.

Checking into a hotel, of which there are many in the area, is the usual option, but a new property by Malaysia's YTL Hotels offers vacationers a chance to stay in their own 'home'.

The townhouses are within walking distance of the Green Leaf Niseko Village, a 200-room hotel which YTL owns. It also owns Hilton Niseko Village.

The architecture of the townhouse was inspired by Japan's heritage townhouses that were inhabited by craftsmen and wealthy merchants towards the end of the Edo period. The interiors were done by Singapore-based award-winning interior design firm, Design Intervention. The posh interiors are modern, but with Japanese touches.

Each townhouse comes with three bedrooms, a lounge area, a fully equipped kitchen, and a dining area that can be converted into an additional bedroom.

Since its launch in December, the townhouses have been fully booked, with a majority of the guests from China and Hong Kong.

Kasara's guest liaison manager Raymond Rozelles says that the townhouses are popular with families, as the townhouses allow them all to stay together. It can be difficult to find connecting rooms in the hotels.

"We offer plenty of food options, and our concierge can help with restaurant reservations, but families like being able to cook their own meals when they stay at the townhouse," says Mr Rozelles.

The townhouse concierge can arrange for groceries to be delivered to the townhouse even before guests arrive.

A private chef can also be arranged to whip up a meal on the premises, and even a handmade sob workshop can be arranged. After a tiring day out on the slopes, guests can also arrange to have a shiatsu massage in the comfort of their townhouse.

Each night, guests can look forward to the turn down gifts which vary nightly. Mr Rozelles says they vary from sake, to cream puffs, sushi and Kasara branded cookies.

Rates for the townhouse start from US$2,000 per night, and while official skiing season for 2015 ends in the first week of April, YTL foresees bookings for year end to start in April. The townhouse is also available for sale at US$2.5 million.

Accommodation aside, a new addition to the Niseko Village is the village itself, a collection of townhouses which houses restaurants and shops. The village is inspired by traditional Japanese machiya architecture with its sliding screens, wooden lattice facade and mood lighting.

This is the place to pick up some last-minute winter gear or designer bags and clothes.

A meal in Hokkaido would not be complete without having its famous seafood, including the king crab, queen crab, hairy crab and snow crab. The Village's Yang Shu Ten restaurant does a kaiseki course with plenty of seafood dishes.

But for something different and more "local", head over to the Crab Shack and order the Steamed Oysters Box, "Hokkaido Fisherman Style". Like its name implies, oysters are steamed in a metal box with sake for a mere six minutes. What you get are juicy oysters that taste of the sea, with a hint of sake.

We wonder if we hear wrongly when Mr Rozelles, who was previously working in a YTL hotel in Malaysia, tells us that he goes to the Two Sticks restaurant weekly to satisfy his nasi lemak craving.

Who goes to Hokkaido to eat South-east Asian food? Turns out that the chefs at Two Sticks are from Malaysia and Thailand, and have been training their Japanese counterparts to cook laksa, satay and Hainanese chicken rice.

The nasi lemak surprisingly tastes authentic, save for the use of Japanese rice in place of Thai rice. Even the sambal chilli has a kick.

Getting that home away from home experience just got easier.

The writer was a guest of YTL Hotels and The Orchards Niseko. Secluded yet convenient

GO skiing or snow boarding in Niseko, and you're most likely to be traversing down the snowy slopes in the major ski areas of Hirafu, Niseko Village, Annapuri and Hanazono.

Much of the activity in Niseko centres around Hirafu, where apart from the ski slopes, there are numerous hotels and apartments, restaurants and shops.

Currently there are seven homes for rent, made up of three, four and six-bedroom houses. Since their launch last year, these homes have been popular with families and groups of friends who want to stay together.

Each home comes fully furnished and is ideal for visitors who plan to stay for a week. Depending on the season, it can cost about S$4,200, for eight guests for a seven night-stay in a three-bedroom home.

The spacious homes come with bedrooms on the ground floor, and the living, dining and kitchen areas on the upper floor. Often, the home owners have furnished the house with their little favourite accessories, so staying here is much like being in a home rather than in a hotel.

Within the development there is plenty of space for children to run around, or to frolic in the snow.

The homes come with high ceilings and plenty of glass windows, giving residents clear views of Mount Annupuri and Mount Yotei, otherwise known as the Mount Fuji of Hokkaido. Residents can get around in their rented cars, or otherwise make use of the property's driver on demand service.

And if you love staying at The Orchards Niseko, there is also the option to buy a property there. There are no restrictions on foreigners buying homes in Niseko. "The land is freehold, and you have an option to design your own home," says Eddie Guillemette, founding partner of Niseko Resorts Group.

The eight-year-old company, started by Mr Guillemette and his wife, Chi, also developed The Chalets at Country Resort and Akazora properties in Niseko. Mr Guillemette assures that the construction company he works with is well-regulated, and "there are little or no risks, unlike in other countries".

The company sells land and house packages, and also run a property management company that takes care of the group's three developments. Buyers can choose from two, three or four-bedroom houses that come with or without garages, and options to customise finishings.

Currently, 80 per cent of the houses at The Orchards are owned by Singaporeans. Most of the homes are rented out, although owners can choose to stay in them as well.

"It is an investment that you can enjoy. You can earn a return on your investment and also use it for your personal enjoyment, unlike with a pure investment property," says Mr Guillemette.

He hesitates to promise a return without understanding how often the owner wants to enjoy/stay in their home, but adds that "current owners are earning one to two per cent in the first year and more in this second year".

The group plans to build another 25 homes on the property, with amenities such as restaurants and retail space when he finds the right partners. In winter, the homes are popular with foreign visitors, while in summer, Niseko caters mostly to domestic travellers.