Mosque in Japan teaches about Islam 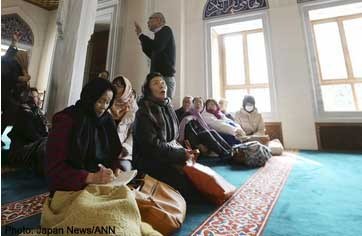 "Which area in the world do you think is the most heavily populated by Muslims?" Shigeru Shimoyama, 66, asked visitors to Tokyo Camii in Shibuya Ward.

The question posed by Shimoyama, who serves as a guide at the facility, left the visitors deep in thought for a while.

"The answer is Asia," he said. "Sixty per cent of about 1.6 billion Muslims in the world are living in Asia. They are our neighbours."

Tokyo Camii, one of the largest mosques in Japan, has held free tours of the mosque every weekend since April last year. During the tour, participants receive explanations about Islamic teachings and the religious functions of mosques from Shimoyama, a Muslim. They are also permitted to observe prayers.

There has been a sharp increase in the number of inquiries about the tour at Tokyo Camii since two Japanese were held hostage in Syria by an Islamic militant group in January. Before this, an average of about 30 people visited the mosque.

After the hostage crisis, however, nearly 100 people visited the mosque on some days.

Yuki Obayashi, 22, a senior at a university in Tokyo, participated in a tour held on Feb. 28.

"I realised for the first time that I had no knowledge about the Islamic religion when the hostage situation occurred."

After the hostage crisis occurred, the mosque's imam spoke to Muslims who came to pray, saying that Islam permits neither persecution nor violence. Shimoyama also continued to pray for the release of the hostages.

Shimoyama feels that more and more people are trying to understand Islam since the hostage crisis.