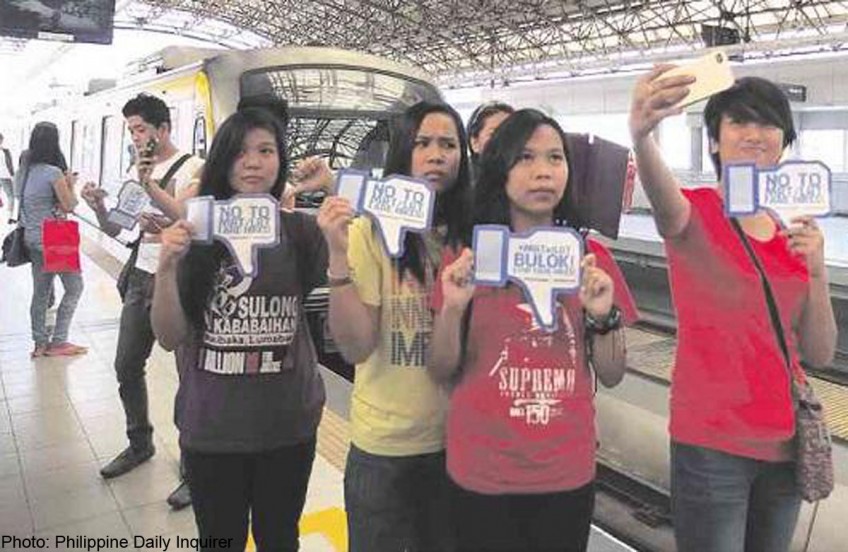 MANILA - Congress will suspend the fare rate increase implemented Sunday in the Light Rail Transit (LRT 1 and 2) and Metro Rail Transit 3 (MRT) systems if the Department of Transportation and Communications (DOTC) fails to justify it at a committee hearing scheduled for Jan. 8, even as protesting commuters took matters into their hands by staging a protest on a moving LRT-2 train early Sunday.

"If there is really a need for us to ask for a deferment, we will do it, we will ask for it," said Catanduanes Rep. Cesar V. Sarmiento.

He said Congress could opt for a full deferment or implementing the fare hike on a staggered basis.

At least two senators on Sunday castigated the DOTC for the new LRT-MRT rates, which are roughly double the previous rates and went into effect 15 days after they were announced while Congress was on a holiday break. The House and the Senate sessions will reopen Monday, Jan. 5.

About 10 members of the militant Strike the Hike consumer group, stylized as #StrikeTheHike, refused to hold on to safety handrails, sit or stay still, all the while taking selfies on a Santolan-bound LRT-2 train, to protest what they said was the "unjust" fare increase.

Holding greeting card-sized thumbs-down signs patterned after Facebook's ubiquitous "like" button, the young protesters first posed for selfies on the platform of the LRT Pureza Station, before boarding a train heading toward Santolan. The group continued to take selfies and even managed to convince a few passengers to pose with them.

Mark Louie Aquino, the Strike the Hike Network spokesman, said the selfie protest was just one of the creative ways the group has thought of to protest against the LRT and MRT fare hike.

"We encourage our fellow Filipinos to create protest actions in any forms. For the selfies, we hope they post them to Facebook with the hashtags #NoToMRTLRTFareHike or #StrikeTheHike," he told reporters.

"We will do more protests on Monday, and seek a temporary restraining order from the Supreme Court, and if the government will not listen, we will make more noise," he said.

Aquino said that the fare hikes were "treacherously" implemented after the Christmas holidays to minimise opposition.

"At this time, when there have been many expenses over the holidays, and with 70 per cent of LRT and MRT riders either minimum wage earners or students, this [fare] hike is an awful surprise," he said.

Citing various news reports, he noted that the government itself has said that the additional profits from the increase would not benefit the system.

"In previous years, the government said the increase will go to improvements in the system. But now, (Transportation Secretary Jose Emilio) Abaya himself said that the money from the increased fares would just go back to the private firms involved in running the trains," Aquino said.

Passengers who agreed to have their selfies taken with the protesters were sympathetic.

"It's okay for me to spend more on LRT fare, but this is just too much," said Aurora Chua, 57, who commutes from Marikina to Binondo to her workplace. "If most of my daily wage goes to my fare, then life will be more difficult for me."

Others seemed more surprised than angry.

"I normally pay P15 (S$0.44) to get from Santolan to Recto, but now, I have to add P10 more," said a 19-year-old female student, who declined to be identified. "The price hike was surprising, but it seems we can't do anything about it."

After getting off at Gilmore Station in San Juan, the group of protesters then crossed the tracks going in the opposite direction, without buying new tickets for the journey.

They repeated this act, highlighting a ripped portion of the protective rubber joint of a part that connected the train wagons.

The antifare hike sentiment spilled over to Twitter, with users such as @maxell_lander tweeting, "LRT, MRT fare hike starts today-What?! This gov't is in the pits, rewarding bad service and corruption by fare hike, shame on you all!"

Another user, who goes by the handle @_ChristianDale_, said, "Long queues, disrupted operations by stalled trains, not functioning escalator and elevator, and filthy toilets, NO to MRT/LRT fare hike!"

Other users, meanwhile, defended the increase, saying that train fares in the Philippines are way lower compared with rail fares in other countries.

Twitter user @seantwenty said it's about time the government hiked fares: "Well aside from the 'sudden' implementation, there's really nothing wrong (with the fare hike). Gov't has been subsidizing, fare not increasing in years."

Sarmiento said the hearings on the fare rate hike formed part of the congressional oversight function over the DOTC and of Congress' duty to protect the public interest.

Officials of the DOTC, LRT, MRT and Philippine National Railways have been invited as resource persons to the House hearing.

Sarmiento said he would defer any opinion on whether the fare hike was justified or not till after he had heard both sides. "Some sector would say that the fare increase is probably high time but then again, given the circumstances of chronic glitches, some might say it is untimely," he said.

He cautioned though that there was a difference between the state-owned LRT and the MRT, which was built and leased to the government by a private group.

Sarmiento said the confusion over the fare rate hike, specifically accusations of lack of public consultations, should serve as an eye-opener for Congress on the lack of a dedicated government agency regulating train fares.

Abaya, Abad to be confronted

Senators Grace Poe and Francis Escudero on Sunday said they would confront Abaya and Budget Secretary Florencio Abad on the "treacherous" increase at the resumption of the Senate public services subcommittee hearings into the MRT's problems.

"That's one of the issues we will ask of them. If there's still a way, we can try to stop, and ask for their commitment to suspend it," Escudero said.

Otherwise, only the public, not the Senate, has the power to stop the fare increase by petitioning the court, the two said.

Escudero and Poe accused the DOTC of putting one over the public by enforcing the fare increase during the holidays.

They said the increase was ill-timed as Congress had already approved allocations for the MRT and LRT in the P2.606-trillion 2015 national budget, and that the MRT has yet to fix its glitches.

No reason for hike

"I don't see any reason to increase the fare, financially and practically. As to its benefits for the commuters, there's no basis," Escudero told dzBB radio, noting that the government did not hold public hearings before announcing the increase.

"It's sad to think, but it appears they did something treacherous," Poe told dzBB in a separate interview.

"They have very bad services, and then they announced the increase while the public was on holiday, and they couldn't go to court," she added.

Amid the backlash from angry commuters, Malacañang touted the expressions of support from its congressional allies representing districts outside Metro Manila not served by the LRT and MRT systems.

Communications Secretary Herminio Coloma Jr. on Sunday rattled off the names of the supporters, noting that they were "elected directly by our people."

"That's why we also have to recognise that there are also a lot of groups and sections of our population who agree with the increase in LRT and MRT fares," he told the state-run Radyo ng Bayan.

Malacañang earlier noted that it was unfair for taxpayers outside of Metro Manila to contribute to the LRT and MRT subsidized fares when they did not use the trains. With the new round of increases, the government is hoping to reduce its subsidy from P12 billion to P10 billion.

Militant groups led by the Bagong Alyansang Makabayan (Bayan) will question the increase in the Supreme Court Monday, a move Coloma said the Palace respected.

But he appealed to the protesting groups to keep protests orderly and not to disrupt traffic.

He said the high court was likely to reject the petition for lack of jurisdiction, lack of due process and the argument that the fare hike was long overdue.

"It's hard to get a TRO when the government is the one involved, most especially when income from the increase in fares will result in an increase in revenue," he said.

Barzaga said removing the P2 billion in subsidies to LRT and MRT commuters would reduce the government's bias against commuters riding the jeepneys and buses on which fares are not subsidized.

"I think it is really unfair, my constituents in Cavite who travel to Makati receive no subsidies of up to 60 per cent of the fare for LRT and up to 75 per cent for MRT," he said.

Beginning Sunday, LRT and MRT fares increased by 50 to 87 per cent. The new base fare is P11, plus P1 for every kilometer. End-to-end fare on MRT 3 increased from P15 to P28.